Almost a year ago, I wrote a column on building the devils from the first Pathfinder Bestiary, and I included the marilith demon in my last installment (Serpentine Creatures). Now seems like the perfect time to take a look at the other demons in the Bestiary.

Much of what I said about building devils will apply here. For example, Nexo Knights, Legends of Chima, and the collectible Minifigures Series are excellent sources of fiendish-looking minifigure and brick-built monsters. I'll also be referring to other past columns for details such as creature size (Giants) and building wings (For the Birds).

Dretch are the weakest of all demonkind. They are small humanoids with claws, fangs, and other bestial features. Build a savage-looking minifigure with short legs, or use short monster figures such as rock monsters (Rock Raiders) or scurriers (Nexo Knights). 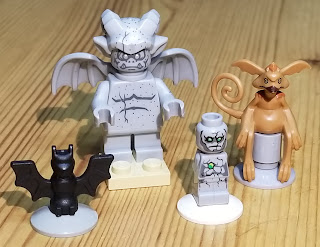 Quasits are Tiny horned demons, the Abyss's counterpart to imps. In Pathfinder, they even have wings like an imp, but D&D quasits do not. For a winged quasit, use the Gargoyle or Cute Little Devil (Minifigures Series 14 and 16, respectively; see Imp in Devils). Alternately, a bat would be closer to the right scale (and makes a good imp as well). For a D&D quasit, simply omit the minifigure's wings. Salacious Crumb  (Star Wars) also makes an excellent wingless quasit, but he will need a brick to sit upon. You can also use a microfigure, such as one of the golems of Nathuz (LEGO Games: Heroica).

Babau are distinctive for the single curved horn on their head. As with the barbed devil, Bionicle Barraki make decent babau. You can also build one by sticking a 1x1 plate with a clip to the top of a minifigure's head, and attaching a rubber fang to the clip. The model shown uses the same tail assembly as the bearded devil. 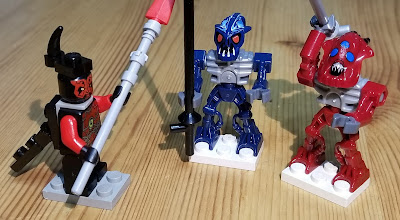 The shadow demon can be based on any all-black minifigure, much like a shadow or wraith (see Undead), but it also has wings and horns. Use the Legends of Chima bat wings shown on the succubus and nabasu (below), or substitute a black cloak (as in the model shown here). The latter may be a better choice if the shadow demon appears in the same adventure with other winged fiends. 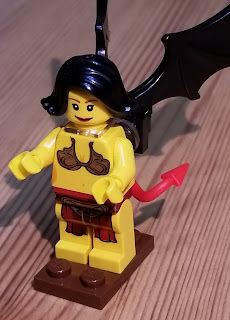 A succubus always appears as a beautiful woman, and most fantasy art depicts them as scantily clad (if clad at all). The "Slave Leia" minifigure's body (Star Wars) is the best fit for the stereotype that I've found, but Lavaria (Nexo Knights) also works for a more obviously nonhuman demoness. The model shown here uses Lavaria's clear wing attachment piece and the Cute Little Devil's tail (Minifigures Series 16).

Nabasu are bat-winged demons with somewhat bat-like heads. The most bat-like minifigures are the Vampire Bat (Monster Hunters and Minifigures Series 8) and Blista (of Legends of Chima's Bat Tribe). Alternatelty, any winged minifigure with a suitably demonic head will do in a pinch. 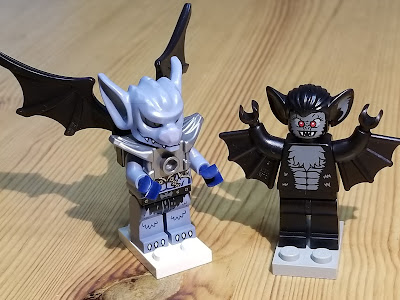 The remaining demons include the six varieties known as "type I" through "type VI" demons in first edition AD&D. Their current names first appeared as parenthetical alternate names, or names of individuals of their type.

A vrock (type I demon) is a Large vulture-headed and -winged demon. The simplest option is to use one of the Raven Tribe minifigures (Legends of Chima) on a Large base; I've added claws to make it more threatening. You can also start with a minifigure torso and legs and build the rest with bricks: 1x1 plates with clips to add claws to the hands and feet; some small bricks and plates to build a vulture's head; and a L-shaped neck bracket to attach wings and a tail. (See For the Birds about building bird heads and wings with bricks.) 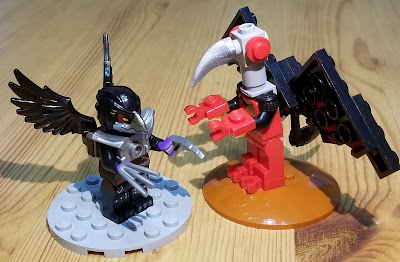 A hezrou (type II demon) is a Large, muscular demon that looks vaguely toad- or lizard-like. See Giants for suggestions for building bipeds at this size (and the slaadi in Non-OGL Monsters for creatures with similar features). With some minor changes in color and head shape, the model shown here can also be used as a base for a dire ape or a barlgura demon (or a Pathfinder baregara [Bestiary 3]). 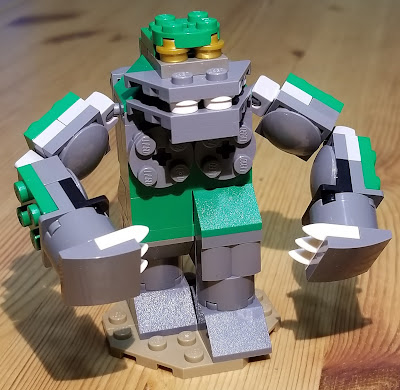 The glabrezu (type III demon) is one of the two Huge demons on this list. The model shown here uses many different connectors to join its various parts: click-hinges (legs and pincers), hinged plates (elbows), clip-and-bar hinges (neck), Technic pins (hips), and a 2x4 brick with pins at each end (shoulders). Because of the model's size and its free-swinging hip joints, I've used a Technic axle mounted in the base to keep it upright. 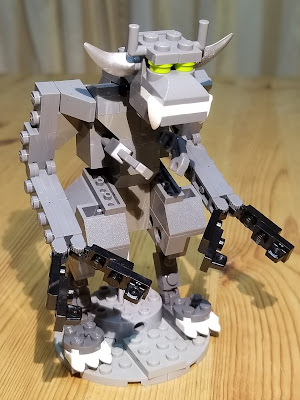 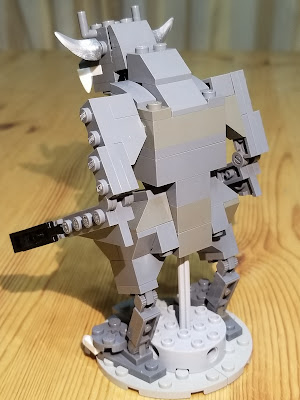 The nalfeshnee (type IV demon) is also Huge. The first model shown here is a bit oversized, but I've included it as an example of a large monster built with the Hero Factory-style jointed chassis and plates. The brick-built boar's head is built around a Technic ball-socket connector. 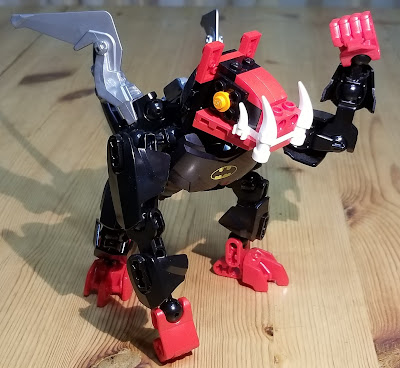 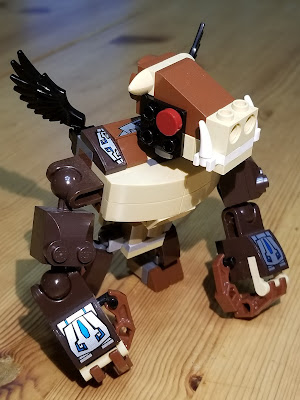 The Huge magma elemental in my Elementals column has an almost identical body design, as both were built to look ape-like. (The large buildable CHI Gorzan [set 70202] is simply too big for anything short of a Colossal ape, such as the humanoid gargantua from Oriental Adventures, or a giant version of the megaprimatus from Pathfinder Bestiary 5.) For a Gargantuan ape, remove the nalfeshnee's wings and tail, and give it a new head. A masked humanoid head from a Bionicle Toa or Hero Factory robot is probably best.

The second model modifies the Gorilla Legend Beast (set 70125) to create a properly Huge-sized nalfeshnee. These demons have significantly undersized wings for their body size, so minifigure-scale wings are not out of place on this demon. The boar's head has been scaled down to fit the Legend Beast's smaller ball-and-socket neck joint.

The marilith (type V demon) was covered in detail in the last installment, Serpentine Creatures. 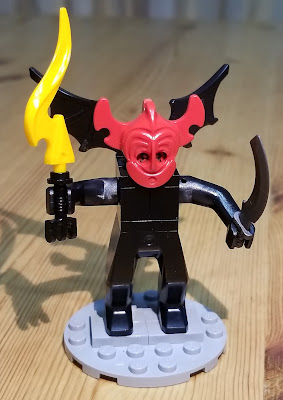 The type VI demon was originally a balrog, based on Tolkien's monster, but the name was soon changed to "balor" to avoid copyright infringement. This Large winged demon has a fiery aura and fights with a sword and a flaming whip. The first model shown here uses the body of Jun-Chi, a "big figure" from the old Adventurers: Orient Expedition theme. (The same base was used for two other monsters in that subtheme: Tygurah and the Yeti. All three can be found on Bricklink for $5 and up each.) The horned mask is from the Islanders series (a subtheme of Pirates), the sword from Pharoah's Quest, and the wings and flame from Legends of Chima. Use a jumper plate to attach the minifigure head, and a SNOT plate and 1x1 clip plates to attach the wings.

The second balor model is brick-built. The basic shoulder and arm assembly is based on the ogre in LEGO GM's "LEGO Monster Manual": a 1x1 round plate connects each arm to a hole in a 1x2 brick in the torso, and a 2x4 car fender piece gives the shoulders some added bulk. Two 1x2 hinge bricks are used to attach the head and wings at an angle. SNOT bricks connect the torso to the legs, which are built of plates and slopes, with 1x1 "cheese-slopes" used for the cloven hooves. The balor is attached to the base with a single 1x1 brick, the hole of which fits over a single stud (1x1 plate) on the base. (This connection and the single-stud connections at the shoulders make mean this model does require some careful handling.) 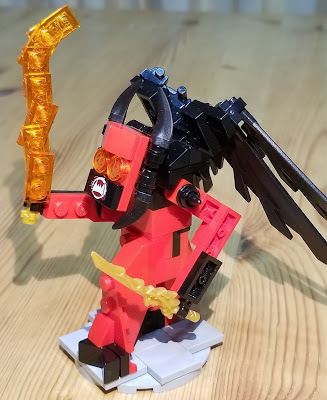 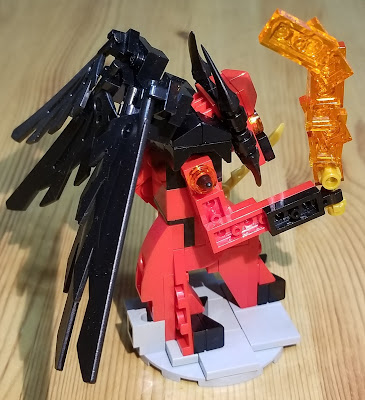