Most of my previous "Building the Bestiary" columns have focused on humanoid creatures, so now it's time to look at methods for building different body shapes. I will start with some basic quadruped bodies, then show how that base can be elaborated upon to create a wide variety of creatures.

A very basic quadruped can be built by adding four 1x1 legs (or two 1x2 bricks) to a 2x4 brick, then adding another brick for a head. Use cylinders, or 1x2 bamboo pieces, to make each leg look more distinct. For a smaller or larger creature, use a shorter or longer brick for the torso, and vary the length of the legs. Adding a base will help stabilize long legs, as well as indicate the creature's space on the battle map. (See "Building the Bestiary #3: Giants" about choosing appropriate-sized bases for different size categories.)


I've tried to demonstrate a variety of heads and tails throughout the photos for this article. A 1x1 brick with a Technic hole is especially useful for any creature with a long, forward-thrust head--horses, cows, dogs, etc.--and it allows you to insert a Technic half-pin or the studs of a pair of 1x1 round plates for eyes. If you're building an animal that has smallish, upright ears or horns, adding a 1x1 top-clip plate to the head covers this detail nicely.

Jumper plates are useful for centering a narrower head on the body, or for adding a tail. Capes, tiny arch pieces, plates with bars or hinges, and many other pieces can be used as tails.  (The Unikitty figure in The LEGO Movie theme introduced a new ponytail piece, which has since been reused in a few other models, but it's rarely available in a natural-looking color.) Add a 2x2 plate between the head and tail to avoid a swaybacked look.

You can also take a hint from the official LEGO horse figures, and build the torso from plates and bricks to leave an empty 1x2 space for inserting a rider's legs. This also allows you to add a horse saddle if you wish. Keep a spare brick on hand to fill the gap when the mount isn't being ridden. On a LEGO minifigure horse, the filler brick is actually a 1x2 plate on top of a 1x2 brick, but if you're not using a saddle, simply match the height to your model. A shallower leg slot means that the rider will sit higher on the animal, so keep that in mind when deciding how deep to make your torso and the leg slot.


Another option for legs, and one that gives the model more articulation, is to use minifigure legs. The pegs at the waist fit into the underside of a normal brick, but are too tall to fit into a shallow plate, so this option works best with a 2xN brick torso.

Here are a few examples of models that can built with the basic quadruped body described above.

Riding Dog or Pony: Small races like halflings and gnomes usually ride Medium mounts, which need to fit into a 1" space on the battle map. Start the body with a 2x3 brick or plate. The head of the pony shown below is a specialized piece usually used as a podium for a control panel, but the shape is perfect for a small horse's head.


Unicorn: Use any method you wish to build a horse, then add a unicorn horn to the head. You will need a hollow stud on top of the head in order to mount the horn. 1x1 bricks with Technic holes usually have hollow studs on top, as do all jumper plates. If you don't have any spiraled unicorn horn pieces (available in some Castle and Ninjago sets), use a small rubber fang, which is the same size but slightly curved.

Pegasus: Use bricks or plates with clips to allow the attachment of wings to the sides of the body of a horse. This also works with a pre-fab LEGO horse; just add two 1x1 clip plates under the saddle or the filler brick.

Centaur: Add minifigures legs to the bottom of a 2x4 brick, and use a jumper plate to add a tail, Put either a 2x2 or 2x3 plate on the back, depending on how high you want the human half to stand, then add a minifigure torso and head. For an archer, hang the quiver from a peg on the horse back; this accessory hangs down too far the minifigure's back to fit on the centaur's neck as usual. For a centaur colt, use a 2x3 brick and 1x1 cylinders or cones for the body and legs; this model can fit into the 1" square of a Medium miniature (like the pony, above).


Sphinx: This sphinxes shown below are more advanced models that use the basic quadruped build as a starting point. The bodies are built from plates, including clip plates to attach the wings and a hinge plate to add the tail. (I used an older "toothed" hinge when I built these some years ago, but the "clicker" hinges that are common these days would work just as well.) The head is attached with a jumper plate. For the gynosphinx's chest, I attached a 1x2 plate to the fronts of two 1x1 "headlight" bricks. The rear legs are built with arch bricks rather than cylinders in order to make them look a little more lion-like, and also to make the model more stable by giving it a broader base. 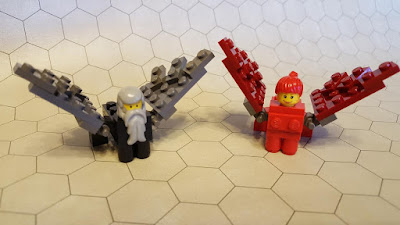 Go Wild!: Finally, here are a few wild animal models to help inspire you. The bear and giraffe are fairly simple monochrome models using slopes and arches to achieve a distinctive silhouette. The rhinoceros requires more specialized pieces, including hinges, a fang for the horn, a "boat plate" for the rounded belly, and a couple of unusual sloped bricks for the back.