No column this week due to the holidays. I'll be back in the New Year with more of my eclectic ramblings.
Posted by Tim Emrick at 4:59 PM No comments:

Email ThisBlogThis!Share to TwitterShare to FacebookShare to Pinterest
Labels: holidays

One tradition that I try to keep each year at this time is a letter to friends and extended family summarizing some of the most important and interesting experiences that my family has had in the past year. That letter always includes a paragraph or two about our RPG activities; a draft of this year's follows in italics:

[My wife] Erika and I continue to pursue role-playing games as one of our chief hobbies. This past year, we have been playing a mix of Big Eyes Small Mouth, Pathfinder, and D&D 5th Edition. We've been doing more gaming with the kids, though at ages 11 and 10, they're still most comfortable with shorter sessions tailored to them.

Just over a year ago, Tim started rebuilding and adding to his RPG fan errata site and started a blog titled "Studded Plate" about RPGs, LEGO, and his other geeky hobbies. These projects provide another creative outlet, as well as a more substantial writing portfolio to share with potential employers.


I try to keep that section pretty short, since not all of our family and friends are gamers. However, this blog gives me an opportunity to expand on this subject for those of you who are.

I last wrote about what I've been playing back in March. Since then, Erika has converted Dungeon Crawl Classics: Dungeon Interludes to Pathfinder and run the first installment of that series for our group. I continue to run "The Kynthiad," a solo BESM game, for her.

In my Pathfinder Freeport: The City of Adventure campaign, we have started the final grand adventure for this crew of miscreants (though we're currently on a holiday-induced hiatus). Once "Gorilla Island" wraps up, we'll be bidding farewell to Freeport for a while so that I can finally start a new Pathfinder campaign, "Time of the Tarrasque."

But before we get to that, I intend to run a couple of one-shots. The first, "Winter Holiday," is a Christmas-themed adventure from Polyhedron Newszine that I ran many years ago using AD&D 2nd Edition. I'm converting it to Pathfinder to run it for my current group around or just after New Year's. I also plan to run the sample adventure from the Fantasy AGE Basic Rulebook for my children (and a few adults) sometime soon so that we can all try out that system. (Expect blog posts about those adventures once I've run them.)

A little over a year ago, I had to migrate my gaming websites to new homes at Google Sites. These wikis include: Tim's Errata Archive, my unofficial fan errata site; player background for my ongoing and upcoming campaigns (The Kynthiad, Winds of Freeport, and Time of the Tarrasque); and Thastygliax's Vault, which houses all my other gaming pages. I continue to add new material to those sites, and occasionally write about those updates here.

That's all for now. The best way to keep updated on my gaming activities--short of being part of them yourself--is to keep watching this blog. I wish a very merry holiday season to you and yours, and good gaming!
Posted by Tim Emrick at 8:40 PM No comments:

Some monsters in Call of Cthulhu supplements are weird in a horrific way, as any Lovecraft fan would expect, while others are just plain peculiar. Here is a prime example of the latter, converted from Ye Booke of Monstres. The illustration below is from that book, and resembles a D&D modron more than anything else. 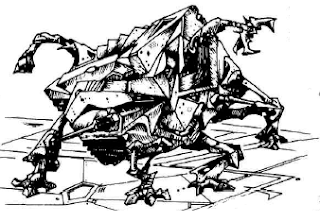 This creature is about three feet tall, with a body that looks like a metal cube. From each face of the cube sprout two short, thin legs ending in three-toed feet or hands. It walks on its bottom-most legs, and carries metal tools in the others.

The inhabitants of L'gy'hx (Uranus) are not a hostile race, and are rather curious about other intelligent beings and any samples of worked metals they might possess. This metallic race is skilled in working adamantine, which is plentiful on their world--in fact, it makes up much of their own bodies.

The shans visited L'gy'hx after Shaggai's destruction. The natives eventually drove them off-planet due to the shans' obscene worship of Azathoth. Some of the inhabitants of L'hy'hx unwillingly accompanied the shans to Earth as slaves. Some of these aliens might visit Earths to free their kin from the shans. (See Call of Cthulhu d20 about the Insects of Shaggai, also called shans.)

Inhabitants of L'gy'hx almost always carry adamantine weapons and tools. They are proficient with simple weapons and spiked chains, but no armor or shields.

Most L'gy'hx leaders are fighters, who typically learn Improved Trip as soon as possible in order to more quickly neutralize foes with their spiked chains. Those with sufficient wealth wield enchanted weapons, and are fond of shock and shocking burst weapons, which can be devastating when employing a chain grapple.  Some champions are dedicated to destroying the shans and freeing enslaved kin; these usually have ghost touch weapons in order to more easily damage the incorporeal shans.

The inhabitants of L'gy'hx worship the two-headed bat deity Lrogg, an avatar of Nyarlathotep (chaotic evil). Clerics of Lrogg may choose two of the following domains: Chaos, Destruction, Magic, Trickery.
Posted by Tim Emrick at 8:19 PM No comments:

This creature is converted from The Complete Dreamlands (for Call of Cthulhu).

This shadowy blob has no definite form. It extrudes a menacing black tendril  as it moves closer.

Shades appear to be globes of darkness with no definite form, even if viewed by true seeing or the like. They are native to the Dark Dimension (as the Plane of Shadows is known in the Dreamlands). They are the servants and companions of Zo-Kalar, god of life and death, and can be summoned by mortals using summon monster IV, lesser planar ally, or lesser planar binding. They are often confused with incorporeal undead, but are living creatures of semi-tangible shadowstuff.

Exceptionally durable or lucky shades may survive long enough to gain class levels. Most advance as rogues or shadow bloodline sorcerers (Advanced Player's Guide 140). Those who become clerics of Zo-Kalar (neutral) may choose from the following domains: Darkness, Healing, Repose, Travel, and Trickery.
Posted by Tim Emrick at 11:26 PM No comments: