"April showers bring May flowers," as the proverb says, so I've decided to discuss building LEGO miniatures of plants this week. First I discuss building trees, then explore the different plant monsters found in the Pathfinder RPG Bestiary. 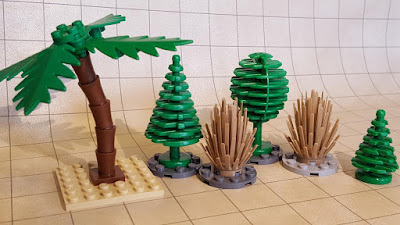 Many plant monsters look like normal trees, and druids can animate or awaken trees to fight their enemies. The LEGO Group makes prefabricated trees and shrubs, some examples of which are shown here. Several themes--including City, Creator, Holiday, Minecraft, and others--include sets that include trees built from bricks.

A proper discussion of building trees would be a column (or series!) by itself, so I will just show a number of examples then move on to other plants. The first two trees in the next photo were built with common sloped bricks and brown cylinders. The third tree was built with sloped bow pieces; the back half is a hull end that mirrors the shape. The fourth tree was built by attaching the trapezoidal plates to the sides of two travis bricks (1x1 bricks with studs on all four sides), one at the level of the top stud; the other is set two studs below it and connects to the trunk. 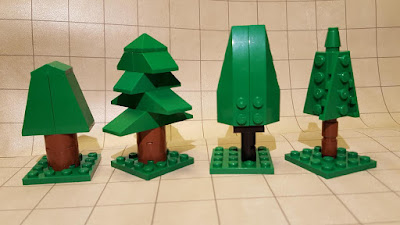 The next photo shows a few simple models that use various types of LEGO foliage. (The 4-pronged brown plate in the right-most model can be found in Forest Police sets and other recent sets that include large brick-built trees.) 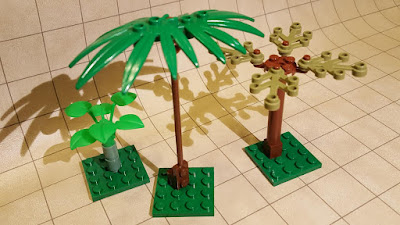 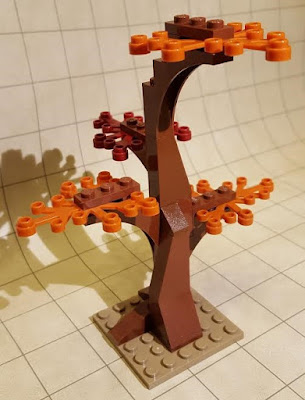 My first large LEGO tree as a child was a Forestmen set in the Castle theme. That set used large brown half-arches as tree boughs, to which large 5x6 foliage bricks were attached, and locked in place with 1x3 plates. This final tree model shows that technique, with a number of slope bricks added to give some volume to the trunk and roots.

(The treant model later in this column also uses these half-arches for its hair/canopy.)

The easiest way to represent vines and creepers on the battle map is with some plates of appropriate colors and sizes. As we saw in the Spell Effects column, large LEGO foliage pieces also work well to cover larger areas, such as the 10-foot square of an assassin vine. The studs on the foliage pieces (and their hollow centers) can be used to attach other bits of greenery for a more dramatic miniature. A Medium yellow musk creeper can be built in the same way with smaller foliage pieces and the addition of small yellow plates or flowers. 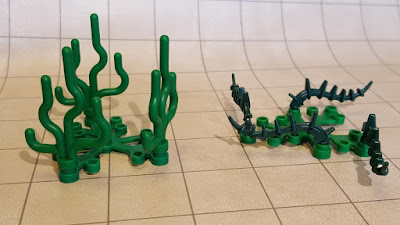 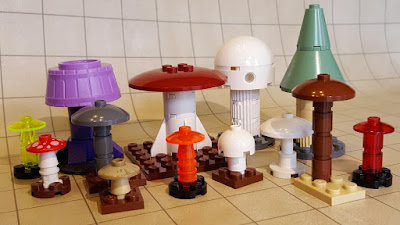 Patches of mold can be represented by plates, while basic mushrooms are easy to build with cylinder bricks and radar dishes. Some radar dishes are even printed with mushroom patterns, like the white-spotted red cap shown here. The photo shows a variety of other cap and stalk shapes and sizes.

Shriekers appear to be man-sized purple mushrooms, but that's a rare color for LEGO parts. The purple mushroom shown above was built upside down, with the stalk attached to the inside of the inverted half-barrel. (The baseplate is therefore studs-down.)

Violet fungi look like shriekers until they attack with their tentacles. The models below use a travis brick and a 4-pronged lantern base for the ambulatory body, small levers/antennae for the tentacles, and a 2x2 radar dish for the cap. 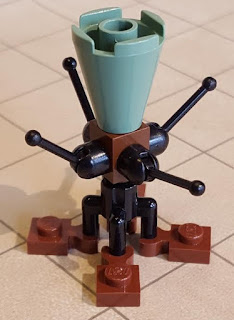 A basidirond has a stalk-like legs, long tendrils, and a large bell-shaped cup. The model here uses the same base as the violet fungus above, but with the travis brick inverted to attach a cone for the flower's cup. 1x1 plates with clips have been added to provide root-like "feet" and to make this taller mini more stable.

Shambling mounds lack a definite shape beyond two trunk-like legs and a mass of vines and leaves. The Plant Monster from Minifigures Series 14 "Monsters" (shown below, right) is a bit undersized but would make a passable shambler on a larger base (or even a basidirond on a Medium base). The photo also shows a Large-sized shambler model, which is an irregular-shaped mass with small foliage pieces built into it. 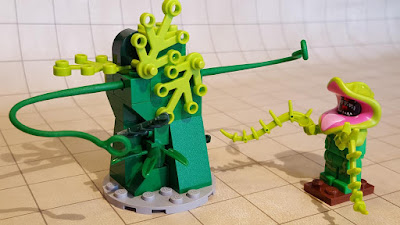 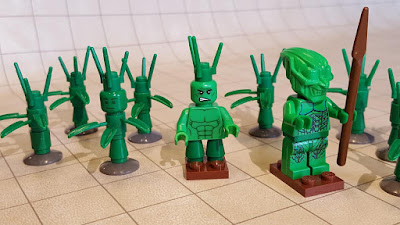 Vegepygmies are small humanoid plants spawned by russet mold. A very simple model can be built with a 1x1 cone, a 1x1 cylinder with bamboo leaves, and one of the 3-pronged 1x1 green plates used to build bouquets of flowers. Chieftains and other leaders can be distinguished by adding bricks or minifigure parts, or using an actual minifigure for the largest individuals. (The larger figures shown at right use an Army man head, the Hulk's torso and head, and a Green Goblin minifigure.) Alternately, a green microfigure (such as a Heroica goblin) makes a good 'pygmy.


In their original appearance in Expedition to the Barrier Peaks, vegepygmies were accompanied by dog-like plant monsters. These "thornies" do not appear in the Pathfinder Bestiaries (and neither monster appears in the D&D 5E Monster Manual). A thorny can be represented by a LEGO dog, or by using some of the techniques from my Four-Legged Friends column.

These vegepygmy models can also be used for twig blights (and their larger relatives) in D&D Fifth Edition games. 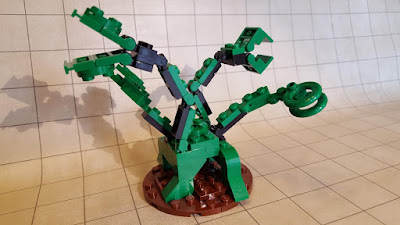 The giant flytrap is one of two Huge plants in the Bestiary. These carnivorous plants have numerous stalks, some used as legs and others sporting the hinged jaws for which the creature is best known. I've used slopes and arches to build the legs of this model, and hinged plates for the biting stalks. This model uses different techniques for each of its four sets of jaws. Two stalks, built with click-hinges, end in mouths that are built with two sets of bar-and-clip hinges with additional bricks added to make the jaws larger. The smaller stalks are built with door hinges; one uses life preservers for the two valves of the mouth; the other uses a pair of 2x2 plates. 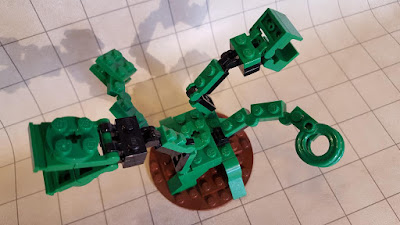 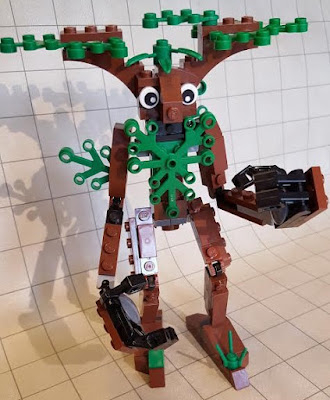 The Tower of Orthanc set (from The Lord of the Rings theme) includes a very highly detailed model of the Ent Treebeard, who stands roughly a foot tall. This is far too large to use as a mini for a Pathfinder or D&D treant, and the set's cost ($200) would be prohibitive for most gamers trying to find affordable LEGO minis.

My smaller model here, for a standard Huge treant, is much simpler than Treebeard, but still has plenty of space for interesting details.

This figure is articulated with the small ball-and-socket joints from the Mixels theme, except for click-hinges at the knees and elbows. The hands have "bad robot arms" for fingers, attached to bar-hinge clips which are locked together with a "boat plate" on the palm.

Where possible, I have incorporated greenery pieces to heighten the model's tree-like appearance. The back and crown of the head is built out of the same half-arches as the autumn tree in the "Trees" section at the start of this column. Other pieces of foliage are locked in with other arched and bowed pieces. (The beard is not as secure as I would like, being attached by only a single stud. But locking it in place more firmly would have detracted from the aesthetics of the design.)

I haven't given this mini a base, but the large feet can easily mark its 3" x 3" space on the battle map. 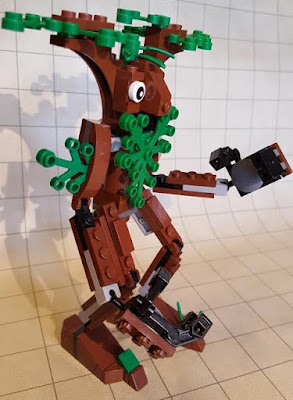 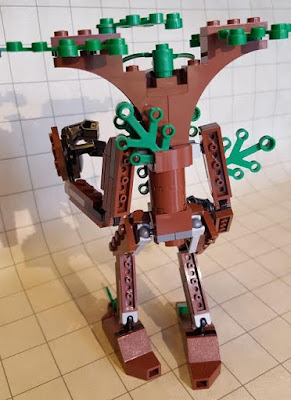