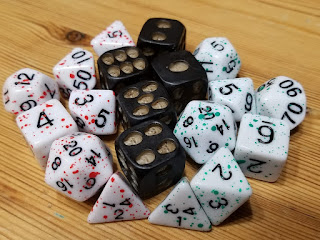 It's been nearly three months since my last blog. I've been busy with many games, I just haven't had a lot to present here.

My "Time of the Tarrasque" Pathfinder home game remains on hold. The player who had a scheduling issue has been in his new job long enough to have our usual game day free again, so now we just have to contend with 1. wonky schedules from the holidays (mostly settled by now), 2. the last half year of inertia, and 3. me finding a way to move forward with less risk of burnout. I have a few ideas for how to deal with some of that in the short-term (such as a brief skip ahead to the next exciting bit, with a little bit of hand-waved XP and gear to go with it).

There is one project that I want to resolve before we resume that game. I've been running a Greek myth-based BESM game for my wife Erika for the past decade or more, on and off. We've reached the endgame stretch, and she and I both want to give it a proper conclusion rather then let it collect dust in limbo. That game is also a homebrew campaign, and while it is not nearly as crunch-intensive as "Time of the Tarrasque," we are at a point where I need more prep per session than I used to for most of its history. (These days, I'm juggling gods, mortal and demigod heroes, and the imminent threat of Typhon's return, all of which demands a bit more brainpower to pull off.) I'm hoping to wrap that up this winter and spring, and be able to devote my full attention to Tarrasque again sometime before summer.

Meanwhile, I am still gaming regularly, it just hasn't been as much of my own games:


My children's high school has a D&D club, which they have both deep-dived into, and both are running games of their own. Now that they have a lot of school friends that they can play with regularly (both in person and online), Erika and I don't get to game with them as often as we did in the past. (They have both cut way back on PFS, though one of them still plays when it's not a school night and they don't have another game going on.) That will change somewhat when Tarrasque resumes, since our eldest child joined that game shortly before the latest hiatus, and is just as eager to get back to it as the other players are.

The same kid has recently started running a (very occasional) D&D 5E campaign for that adult home group to help fill time during the hiatus. All of the PCs are "mudborn," a small race of anthropomorphic axolotls. That's been great fun, and we'll all looking forward to doing more. (I greatly envy this kid's free time, when they can just do more prep/tinkering whenever the mood hits!)

Looking further ahead, all four of us will be attending Lexicon again (here in Lexington, KY) at the end of April. We're also looking into the possibility of attending GenCon, but that's more likely to happen next year due to some other travel plans this summer taking precedence.

Expect to see more posts here as we get closer to resuming "Time of the Tarrasque." I also intend to get back to producing more installments of my "Building the Bestiary" series. In addition, PFS and other games provide a constant demand for me to produce new brick-built RPG minis that fall outside the limited purview of that BtB column, so I may start a second series to showcase some of the more interesting models among those minis.