Minifigure scale is suitable for Small and Medium humanoids, but larger creatures such as giants require other solutions. But before I talk about how to acquire or build the models themselves, I want to discuss how to denote size categories when working with LEGO bricks.


If you play D&D or Pathfinder, creatures larger than Medium size take up more than one 5-foot square on the battle map. In most cases, you will want to put your model on an appropriately-sized base in order to clearly mark what space it occupies. A round base is often preferable to a square one, so that you can easily turn the model without any corners sticking out into other squares. (However, given the nature of LEGO bricks, squares and rectangles are much easier to find!)

Studs are spaced three to an inch, so a Small or Medium creature takes up a 3x3-stud space, Large creatures 6x6, Huge 9x9, Gargantuan 12x12, and Colossal 18x18 (or more). You don't need to match those dimensions exactly; just make sure you don't exceed them, and that you center your model in its space on the map. I use 2x2 or 2x3 plates as bases for Small and Medium creatures, as both those sizes are plentiful and fit inside a 1" square. I prefer a 6x6 round plate or radar dish for Large creatures, but a 4x4 or 4x6 plate also serves well. I typically use 8x8 square plates (or four 4x4 quarter-circles) for Huge creatures, and 10x10 octagonal plates for Gargantuan ones. For a Colossal creature, you will need a 16x16 or larger base, which you can build out of smaller plates if necessary.

I find it useful to have a few extra Large and Huge bases handy during play so that I can place them under miniatures that don't already have a standard-sized base. For example, I own a number of plastic animal toys that I use for creatures of which I don't own LEGO versions, so I'll put the toy on top of a LEGO plate to show its proper size category. Also, if a creature changes size during an encounter, I can put its miniature on a different sized base to show that.


Over the years, a number of oversized characters have been produced for various LEGO themes. The more-or-less humanoid characters of this type include:


Using one of these "Big Figures" gives you a well-defined large character, but they are usually only available as part of larger sets, and those sets tend to only be available through retail for a year or two at most. Many of these figures are available through websites such as Bricklink, where you can expect to pay anywhere from $5-$10 for a smaller, more common character, up to $35+ for a Rancor. Another drawback of these figures is that they have few parts for their size, and few free studs, so are hard to customize. Also, most of them are very specific licensed characters, which may be distracting if you want to use them to represent other monsters. For example, my pair of Harry Potter trolls see frequent use as ogres and giants, but my Hulk is a little too, well, Hulk-ish for that.

A related option is using Duplo figures for giants. These characters are a good scale for depicting Large humanoids, but are rather more silly-looking than scary. Also, unless you buy them individually through a reseller, you will end up with several oversized bricks as well. Duplo bricks are fully compatible with regular LEGO bricks (being exactly twice their dimensions) but they aren't nearly as useful for small-scale models.

If Big Figures are out of your price range or don't cover the monster you need, then you'll need to build your own model. The easiest way of doing this is to modify a minifigure to make it a little bigger, then put it on a base appropriate to its size category.

Some of the collectible Minifigures, such as the Minotaur, Cyclops, and Frankenstein's Monster, already represent creatures that would be larger than human-scale in D&D or Pathfinder. You can simply put these minifigures on a larger base to indicate their true size. (The 3x4 plate that comes with each one will serve well enough for this.)

You can also make a minifigure taller by standing it on two 1x1 bricks, and taller yet by inserting a 1x2 brick between the torso and legs (as was done for the ogre shown here). These changes leave the arms rather short in proportion to the rest of the body, but a larger weapon can help offset that.


The other option is to build a custom model yourself. The photo below shows two Large giant models, one very simple and the other more advanced, with a minifigure for scale. The one on the left is just a stack of bricks with an antenna for a weapon. (If you lack cylinders and slope bricks, simply replace them with standard bricks.) The result is rather crude, but conveys the creature's size and general humanoid shape. 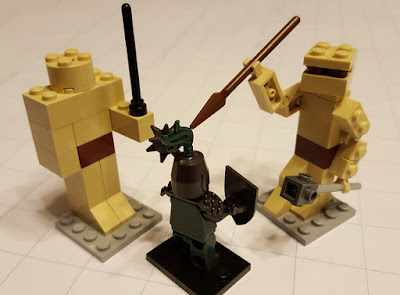 The giant on the right is more detailed, with a few articulated joints allowing it to be posed. The next photo shows the subassemblies better. The right leg uses a slope brick to extend forward, as if taking a step. The shoulders are 1x1 bricks with a stud on one side. (You can also use "headlight" bricks, but you'll need to stick 1x1 plates over the recessed side-studs in order to attach the arms.) A 1x2 jumper plate provides a centered stud for attaching the head. 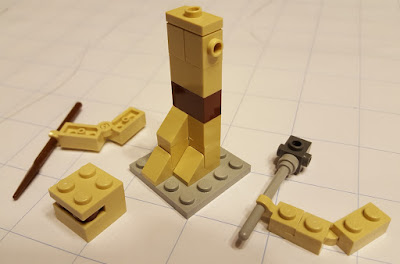 Each arm is a hinged plate, with 1x1 and 1x2 plates giving extra thickness. The hands are 1x1 plates with side-clips, allowing the giant to hold minifigure accessories. The head is a stack of 1x2 and 2x2 plates, with two 1x1 round plates for eyes. You could also use a 2x2 cylinder brick for the head (like the simpler giant above) or a minifigure head.

Experiment with different colors and pieces to change this base model into the kind of giant you need: brown and tan bricks for ogres and hill giants, green for trolls, gray for stone giants, white and blue for frost giants, red for fire giants, etc., with contrasting colors for clothing and armor. Bricks with side-studs can be used to attach additional plates and tiles for hair, beards, or armor, or simply to add bulk to the torso.

And finally, these various methods for providing giant miniatures can also be used for other large monsters with a generally humanoid shape: golems, minotaurs, devourers, genies, dire apes, and many celestials and fiends. Future columns will show examples of some of these creatures.
Posted by Tim Emrick at 10:01 PM