One of the most important innovations of the Third Edition of Dungeons & Dragons was the Open Game License, which allowed third party publishers to use "Open Game Content" in their own d20 products--and their creations in turn would be available for other companies to use. However, Wizards of the Coast never released the entirety of the core rules as Open Game Content (and only very limited content outside of the three core rulebooks). Most notably, some iconic D&D monsters like the beholder and mind flayer remained off-limits.

Paizo's Pathfinder Roleplaying Game, a variant of the d20 rules, is one of the greatest success stories of the OGL. When Wizards released D&D Fourth Edition, support for the previous rules set (v.3.5) ended, both from Wizards and from any third-party publishers who still wanted to make money off of D&D. Pathfinder provided a home for gamers who preferred v.3.5, because its rules were backwards-compatible with that edition, and because Paizo never stopped producing new material for their lucrative house system.

I continued playing and running v.3.5 throughout the 4E era, eventually switching over to Pathfinder only a few years ago. Because of this, I have tried to make this "Building the Bestiary" series useful to both D&D and Pathfinder GMs, and have been using the Pathfinder RPG Bestiary as my default reference. But now that I have an even dozen of these articles under my belt and am growing more interested in running D&D Fifth Edition, I have decided to devote lucky column #13 to some of these D&D-only monsters.

Specifically, I will cover the ten monsters from the Third Edition Monster Manual that were never released as Open Game Content: the beholder, carrion crawler, displacer beast, githyanki, githzerai, kuo-toa, mind flayer, slaad, umber hulk, and yuan-ti. (I've referred to illustrations in the Fifth Edition Monster Manual for some of these models, but the 3E version established this list.)

The Humanoids (or Nearly So) 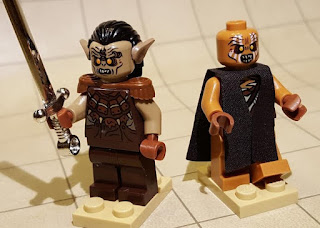 Half of these creatures are more or less humanoid in appearance, so are easy to represent using existing LEGO minifigures.

For githyanki or githzerai, look for characters that look gaunt and/or have unusual skin tones to help distinguish them from the common humanoid races. The photo to the right shows two Gundabad orcs equipped similarly to the gith entries in the Fifth Edition Monster Manual. Don't forget to give those high-level githyanki fighters their signature silver greatswords!

Kuo-toa can be represented by a variety of underwater monster races, such as the Swamp Monster (Monster Hunters) and various fish-men from the Atlantis theme. (See Underwater Races for more ideas.) 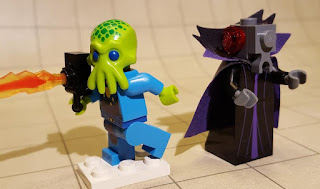 The Alien Trooper from Minifigures Series 13 makes a perfect mind flayer, even down to its tentacle count. Some of the aliens from the Space Police and Alien Conquest themes are also suitable. You can also build a decent mind flayer by replacing a minifigure's head with a travis brick (a 1x1 brick with studs on all four sides). Add 1x1 round plates for eyes and a 1x1 plate with a clip to suggest the tentacles.

The serpent tribes from Ninjago provide a wide variety of choices for yuan-ti miniatures. Use a character with a snake's lower body for an abomination (which conveniently fits its Large size), and one with legs for a malison (which were called "halfbloods" before 4E). For purebloods, use regular humans if they are posing as such, or overtly snake-themed characters like the Anacondrai cultists (from Ninjago Season 4) if they are operating openly. (See the Humanoids column for more ideas for building reptilian races.)


Back to Basic Beasts 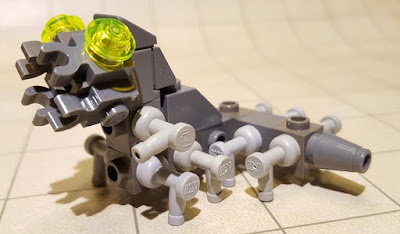 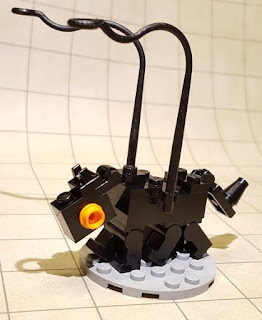 For a carrion crawler, see the notes on centipedes from my last installment (Vermin). The model above shows a rearing carrion crawler, with tentacles provided by clip-plates (as with the mind flayer, above, but on all four sides of the travis brick).

For a displacer beast, see my discussion of Four-Legged Friends about how to build a monster with multiple pairs of legs. The model shown here uses three sets of minifigure legs inserted into a 2x4 brick. Two whips are attached with clips to provide the tentacles.

Beholders (and their kin)

The main challenge in building a beholder is attaching enough eyestalks to a model small enough to serve as a miniature. The tan beholder below is my earliest attempt at a LEGO beholder (from several years ago), while the smaller gray beholder is a Medium-sized gauth. In both models, levers were used to provide eyestalks. 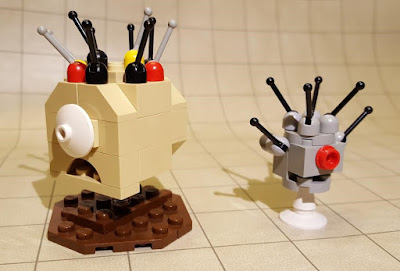 The next photo shows two versions of a spectator, a four-stalked beholderkin from the Fifth Edition Monster Manual, which is Medium in size. The larger figure is a bit oversized, but with a few more eyestalks added could serve as a regular Large beholder. The smaller figure uses an Alien Clinger (from the Alien Conquest theme) on top of a Mixels eyeball minifigure head. 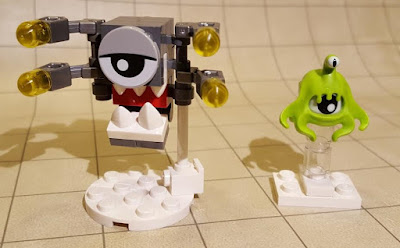 Finally, here is another view of my most recent beholder model (below left). This model makes heavy use of sideways building techniques (using "studs not on top," or "SNOT," bricks) and a variety of attachment points for the eyestalks (which are trunk and tail parts).  A clear brick suspends it above a Large-sized (6x6) base. 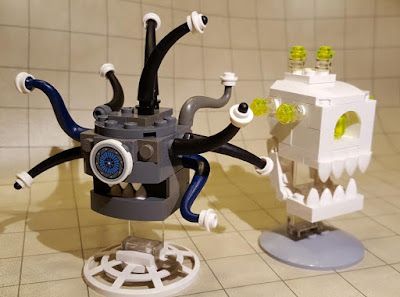 On the right is a death tyrant, an undead beholder from the Fifth Edition Monster Manual. This creature is essentially a cyclopean skull with glowing motes of light where the eyes used to be; its flesh (including the eyestalks) has long since rotted away. I've used small clear plates to attach a number of trans-yellow plates to "float" about the head, and a trans-yellow minifigure head for the central eye. 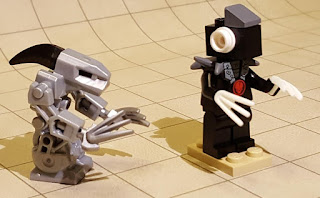 The most powerful slaadi are Medium-sized, so can be represented with minifigures. The gray slaad shown here is an Exo-Force robot with a horn and claws added. The black death slaad uses a piece of armor (and a cheese slope) to suggest its numerous body spikes.

The red, blue, and green slaadi below are Large-sized, so require brick-built models. (See Giants for the basics of building characters at this scale.) The arms are built from hinges and plates, and attached to Technic half-pins inserted into the holes of special 1x2 bricks. The same kind of brick is used to attach the eyes (and for the death slaad's head, above). In the Fifth Edition Monster Manual, the green slaad is shown with more variation in skin tone than his lesser kin, and actually wears and carries some gear, so I've added those details to its model. 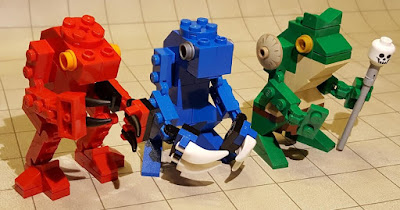 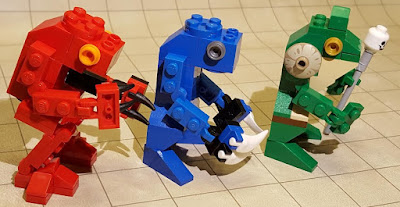 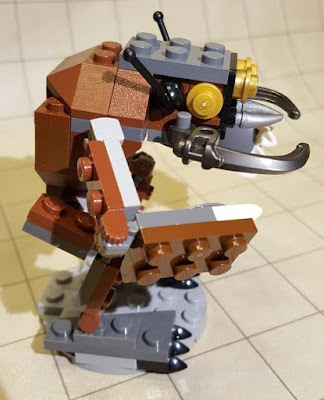 The umber hulk is Large and primarily insect-like in form. The model shown here makes use of the small ball-and-socket joints from the Mixels theme to attach its limbs, and click-hinges for other joints. The mandibles are Hero Factory parts clipped to L-shaped bars on 1x2 plates in the head.

Because this model is a bit top-heavy and just a little oversized for its creature, I have attached the feet to a 6x6 round plate to mark its 10-foot space on the map. 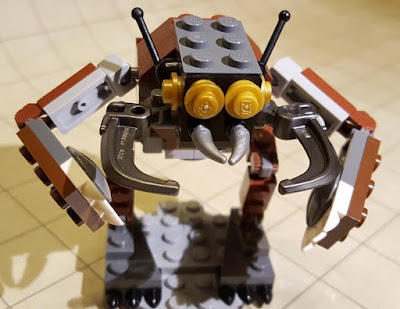 My next "Building the Bestiary" column will return to creatures found in both D&D and Pathfinder, but I haven't decided yet on which kinds of monsters to tackle next. If you have any special requests, please let me know in the comments!