The Tome of Beasts and Freeport 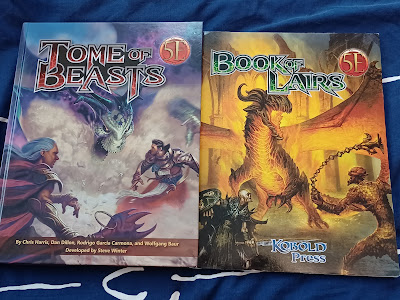 At 430 pages, this creature collection is too large to give an in-depth treatment in a single blog post, but I wanted to highlight some content that seems especially appropriate for campaigns set in the World of Freeport.

Several monster entries reference Kobold Press's Midgard campaign setting, but these monsters can be used in any D&D setting with minimal changes. For example, one of the new languages introduced here is Void Speech, which is spoken by creatures originating in, or influenced by, "the Outer Darkness." The sidebar about it suggests that any ancient language with an evil reputation can be substituted. This sounds a great deal like the Aklo language, spoken by aberrations and evil fey in the Pathfinder RPG, which is in turn drawn from Cthulhu Mythos literature--and, in fact, Aklo is a common language among Pathfinder's Lovecraftian monsters, just as Void Speech is among the Mythos creatures presented in the Tome of Beasts. Deep Speech fills a similar niche in the core 5E rules, but Void Speech is presented here as a distinct language.

Speaking of the Cthulhu Mythos, this book presents several creatures suitable for enhancing that element of the Freeport setting. Deep ones easily could be encountered in or near Freeport, having infiltrated the city or parts of the Serpent's Teeth. The folk of Leng are accomplished travelers, but would probably avoid Freeport in favor of its hated enemy Mazin due to their trade in slaves. More exotic monsters (gugs, mi-go, shoggoths, spiders of Leng, and star-spawn of Cthulhu) would be found in  more distant lands or other worlds, but are frequently sought out by the kinds of mad cultists who plague the City of Adventure.

The Tome contains numerous monsters that could be encountered in Freeport itself or the waters around it. Many new snakes and other reptiles--a defining feature of the Serpent's Teeth region--are included, and the Villain Codex appendix includes a variety of humanoid foes. GMs wishing to further explore The Ironjack Legacy will find a wealth of new constructs, including many types of clockworks. Fabulous aquatic creatures, such as sea dragons, krake spawn, and zaratans, are also well represented here.

Fey in the Serpent's Teeth are almost exclusively reptilian, but other types can be found in the wider World of Freeport, particularly in Rolland, the forest kingdom of the elves on the Continent. The shadow fey elves, and the fey lords and ladies who rule them, are most commonly encountered on the Plane of Shadow (known as the Shadowfell in official 5E sources). This plane likely has links to the Feywild and fey-touched regions of the Material Plane (such as Rolland). The legendary Lord Bonewrack, who dwells in Shadow Freeport, might very well be a powerful shadow fey elf.

This book also contains a wide variety of desert-dwelling creatures suitable for encounters in Hamunaptra (see Egyptian Adventures: Hamunaptra). Many of these even have a strong Egyptian flavor to them, such as the shabti, subek, and a few new mummy-like undead. In the World of Freeport, the Nurian language mentioned in those entries would correspond to the common tongue of Hamunaptra.

Monsters inspired by Norse myths (einheriar, jotun giant, ice maiden, lindwurm, rattatosk, rusalka, and valkyrie) would be appropriate for the Viking-like land of Druzhdin, in the far north of the Continent.

The imperial ghouls might be a holdover of the power of the ancient Necro-Kings, driven (literally) underground following those undead warlords' defeat. (See the "Beyond Freeport" chapter in either The Pirate's Guide to Freeport or the Pathfinder edition of Freeport: The City of Adventure.) The ghoul god Mordiggian, mentioned in the "Lords Subterranean" sidebar, gets a chapter in Cults of Freeport.

Finally, some of these creatures can be used for converting monsters from past Freeport adventures or bestiaries, either as-is, or as a starting point:

This book contains two dozen monster lairs, arranged by increasing character level, from 1st to 15th. Each entry is 4 pages long, with one page being a full-color map of the lair. The lairs are a very diverse collection, including numerous dungeons but also city buildings, underwater spaces, forest camps, and a handful of truly exotic locations (stairs going miles up a steep mountainside; a citadel on the edge of space; and even the branches of Yggdrasil). All stand completely on their own, but a few form logical sequels to earlier lairs (such as the stairs and citadel just mentioned). A few of the inhabitants of these  lairs appear in the Monster Manual, but most are pulled from the Tome of Beasts, making that book necessary in order to use these short adventures, unless the DM wishes to repopulate the maps themselves.

A few of the lairs are set in cities, and could be adapted easily for use in Freeport. Others, such as The Pirate's Cove or Temple of the Deep Ones, could be hidden elsewhere in the Serpent's Teeth with little effort.

Most of the other lairs would best be set on the Continent, or even further away. The forest lairs seem most appropriate to Rolland, while the desert lairs would fit Kizmir or Hamunaptra. The two ghoul adventures could be set almost anywhere in the Underdark, but the DM should give some thought to how the Ghoul Imperium fits into the World of Freeport (see my suggestion above about the Necro-Kings).

Overall, the lairs in this book seem to be interesting short adventures suitable for dropping into a campaign whenever the DM wants a brief change of pace from the regular campaign (or just shorter chapters in a campaign that is largely a series of modules). Most should be playable in a single session, though some higher-level adventures might take longer due to featuring more complex foes.