Spirits of Halloweens Past 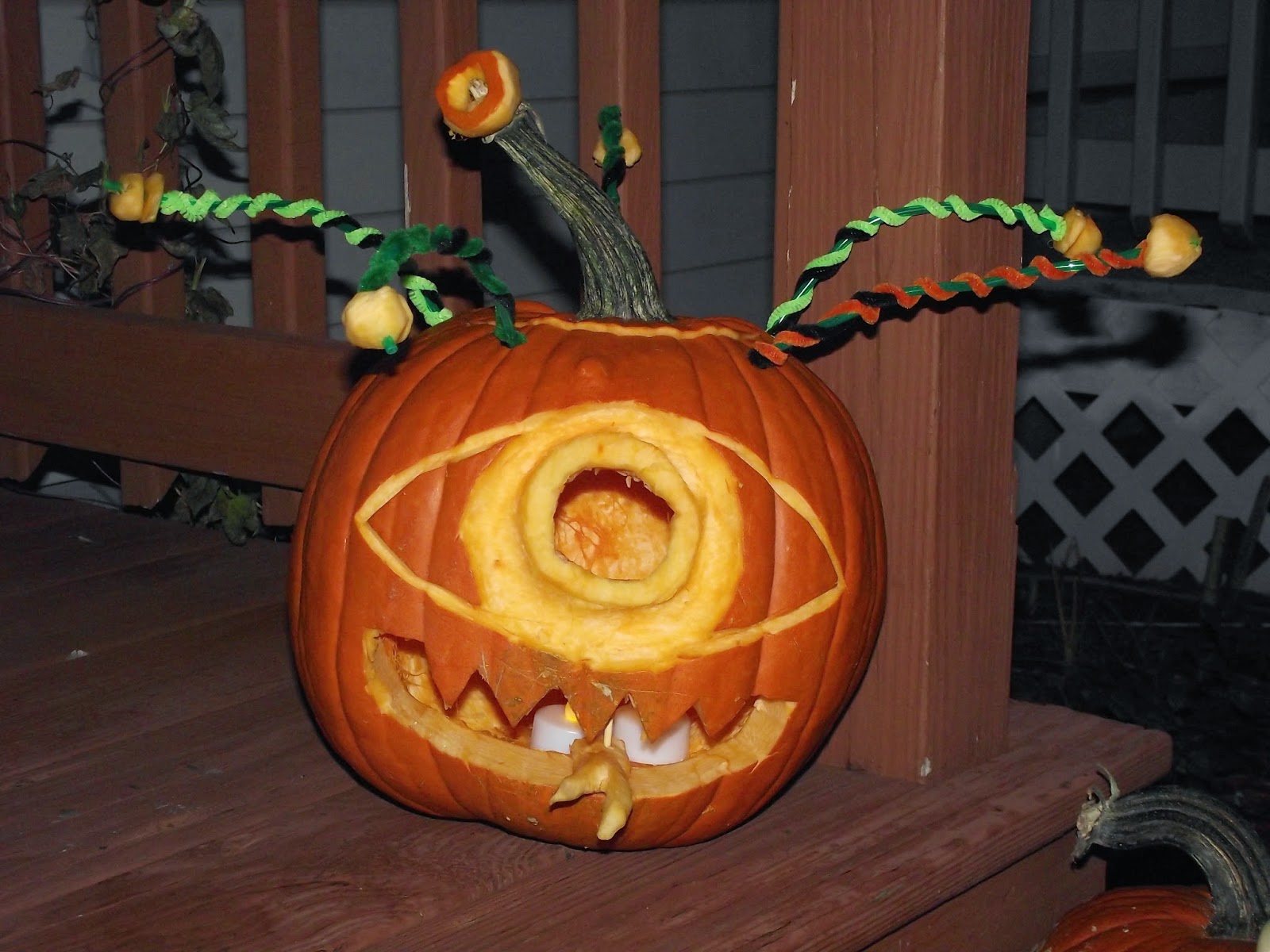 Halloween has always been one of my favorite holidays, ever since I first started trick-or-treating as a small child. The costumes are fun, and I've always had a huge sweet tooth. As I got older, I learned more about the folklore and myths surrounding Halloween and Samhain--and monsters of all kinds--which just added to the appeal. And being an artist since childhood, I've always enjoyed the challenge of creating new costumes.

My family rarely had much money to spend on costumes, and most of them were homemade. Some years, my mom (who mother taught Home Ec) sewed costumes for us. For herself, she usually just pulled out her oldest, most ragged yard work clothes and escorted us dressed as a hobo. (At least one year, we had to make do with the same, because we were visiting Grandma Halloween weekend.) But even at a young age, I had an urge to make something that stood out from the other kids. Even if it was something I cobbled together from plain brown cardboard, like the Jabberwock costume I built when I was 10 or 11. The floppy claws attached to gloves and boots were easy. It was the wings (attached to an old vest with coathangers) and the mask (sculpted to fit over my glasses) that required some engineering.

I have two kids of my own now. The first year we took them out trick-or-treating, they were three and four, and they had very simple costumes: my daughter (who we call "the Blackbird" online) was a fairy princess, using some dress-up clothes passed down by her cousins. Her little brother ("the Owl") wore a store-bought pumpkin sweatsuit (which he proceeded to wear year-round until he outgrew it). I used some old garb from SCA and LARP events to dress as a pirate to take them out, while my wife Erika stayed at home to hand out candy. These have been our roles on Halloween night ever since. 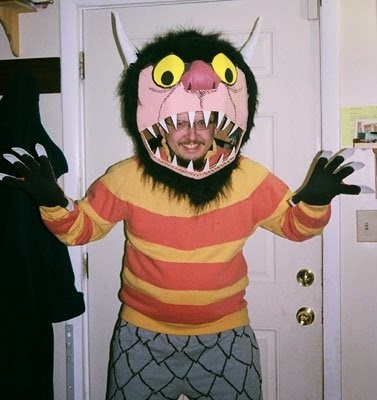 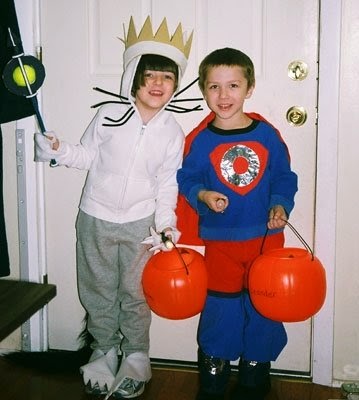 After that first year, I made a point of making costumes for them each year. In 2009, The Blackbird wanted to be Max from Where the Wild Things Are. I decided that she needed a Wild Thing to follow her around, so built myself a costume--which remains the most ambitious costume I've ever designed, before or since. The Owl had trouble choosing a costume, so I made him a superhero costume. We had a bit of fun at his expense, though: one of our nicknames for him was Captain Obvious, because he had a knack for stating it, so that's the hero he got to be. 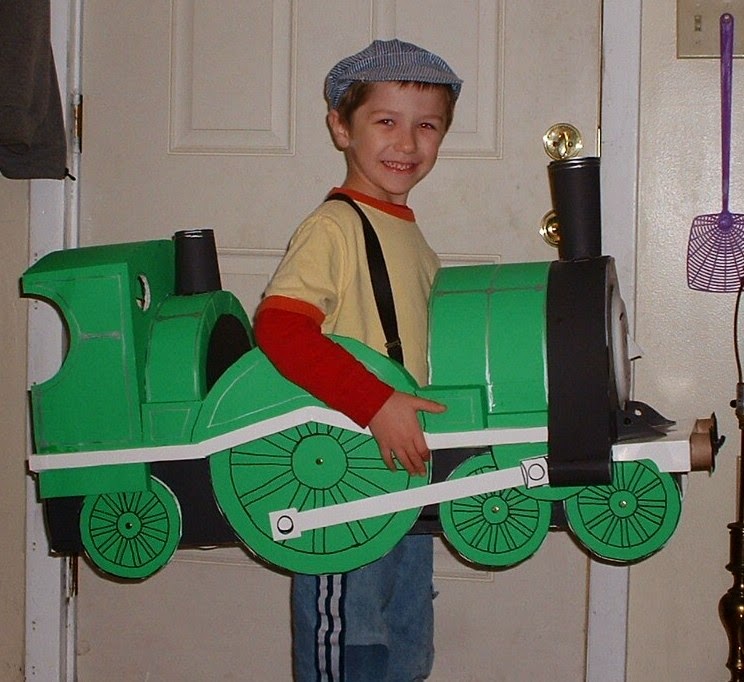 In 2010, I put most of my energies into their costumes, leaving mine (a black-robed sorcerer) to be thrown together at the last moment. The Blackbird has been obsessed with unicorns since she first learned what one was, so I built her a head to fit over her hoodie. She wanted a flying unicorn, so wore her fairy wings with it. Similarly, the Owl has been in love with Thomas and Friends since he was a toddler, so wanted to be Emily, one of the other engines. That took quite a bit of time to research, sketch plans, and build, but he was over the moon when it was finished. The costume--a cardboard train engine that hung by straps over his shoulders--was actually too big to keep in his room easily, so I eventually cut off the front (face, bumpers, funnel, and front wheels) to hang on his wall. (When we moved to Kentucky last year, we packed it and it's still hanging over his desk.)

By the next Halloween, the kids had been exposed to the LEGO Ninjago theme, and wanted to dress up as their favorite ninjas. My wife actually contributed more to their costumes than I did that year, by finding instructions for making ninja hoods out of folded t-shirts. For my part, I reused the aviator costume that I put together for InterCon (a LARP convention) the previous spring. 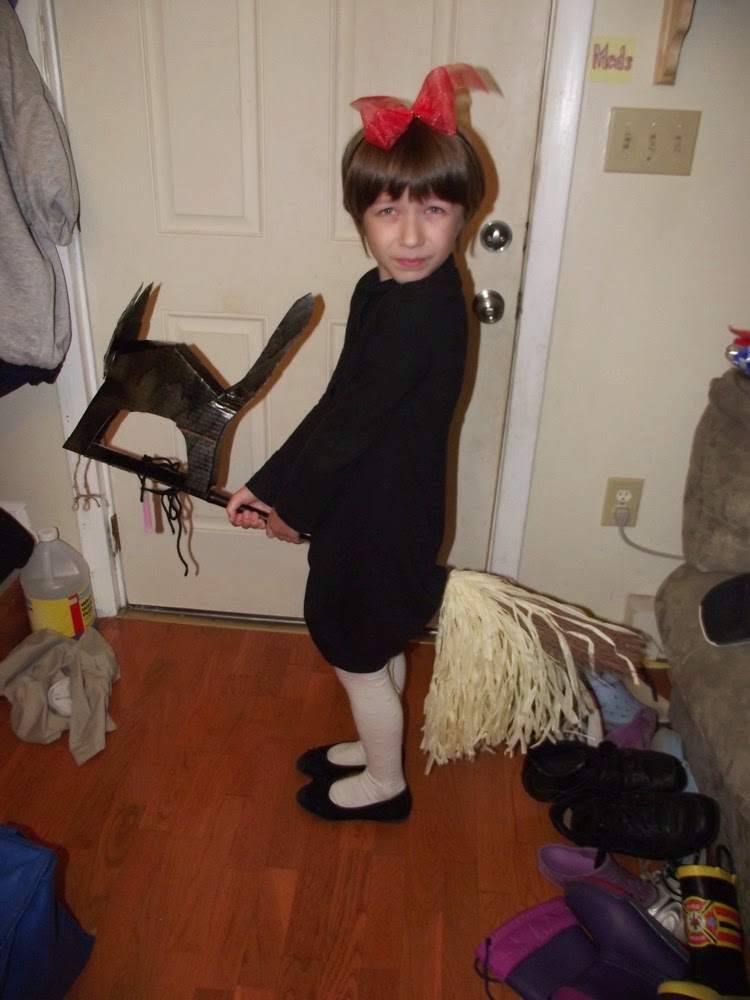 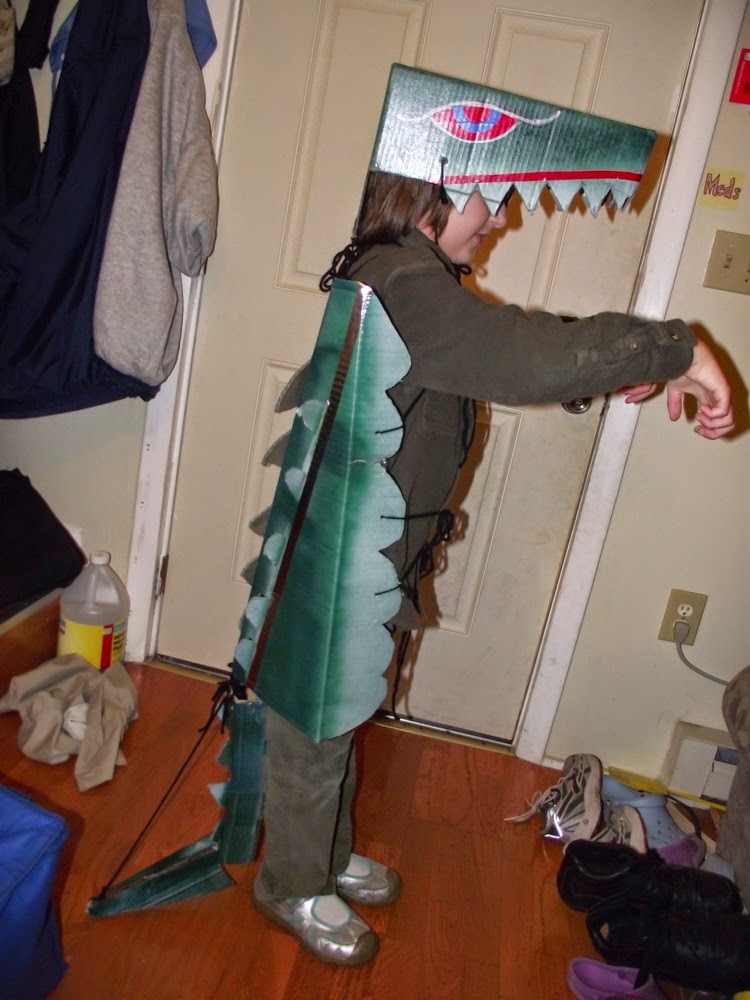 Three years ago, my son (now 7) was watching Kiki's Delivery Service as often as we'd let him, and wanted to dress up as the title character. We found a black dress at a thrift store and a cheap broom at a costume store. and I built a cardboard cat to perch on the broom. My daughter, on the other hand, embraced her love of monsters and asked to be Godzilla. We found her some green clothes, and I built her a head, spiny back, tail, and claws to wear over them. This became the Blackbird's equivalent to Emily--a bulky costume that she loved enough to move it across country. (Unlike previous years, I didn't have any Halloween parties to go to, so didn't make myself a costume.)

The kids followed in the same vein the next year, which was our first Halloween in Kentucky. I made a cat costume for the Owl so he could be Kiki's cat Jiji, and a kraken costume for his big sister. Stuffing and sewing together four pairs of tights to make octopus arms was so time-consuming that I had very little time to work on my own costume. However, I have a Hawaiian shirt that I bought ages ago, so I bought a cheap black curly wig and shaved off my goatee to go as "Weird Al" Yankovic. 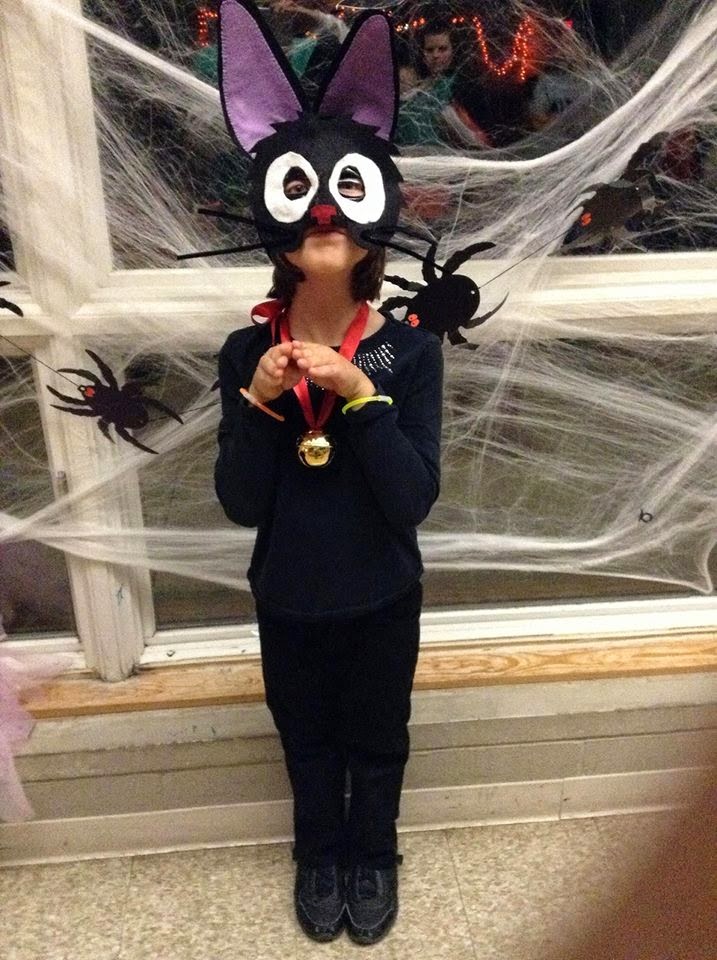 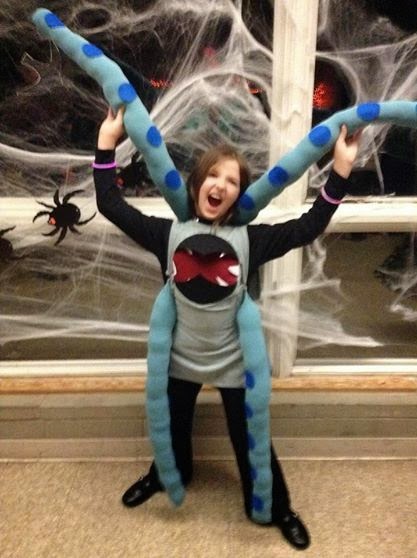 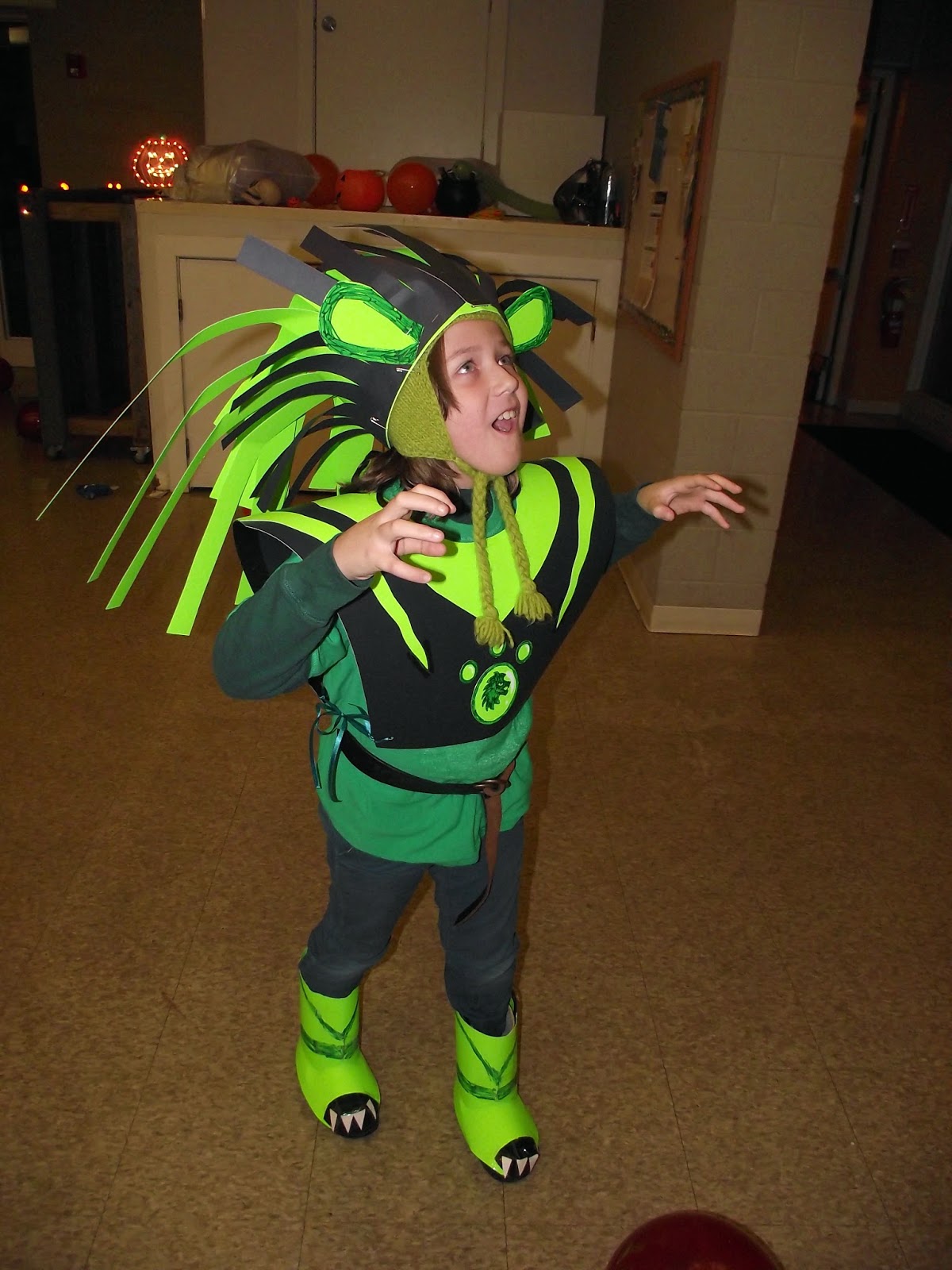 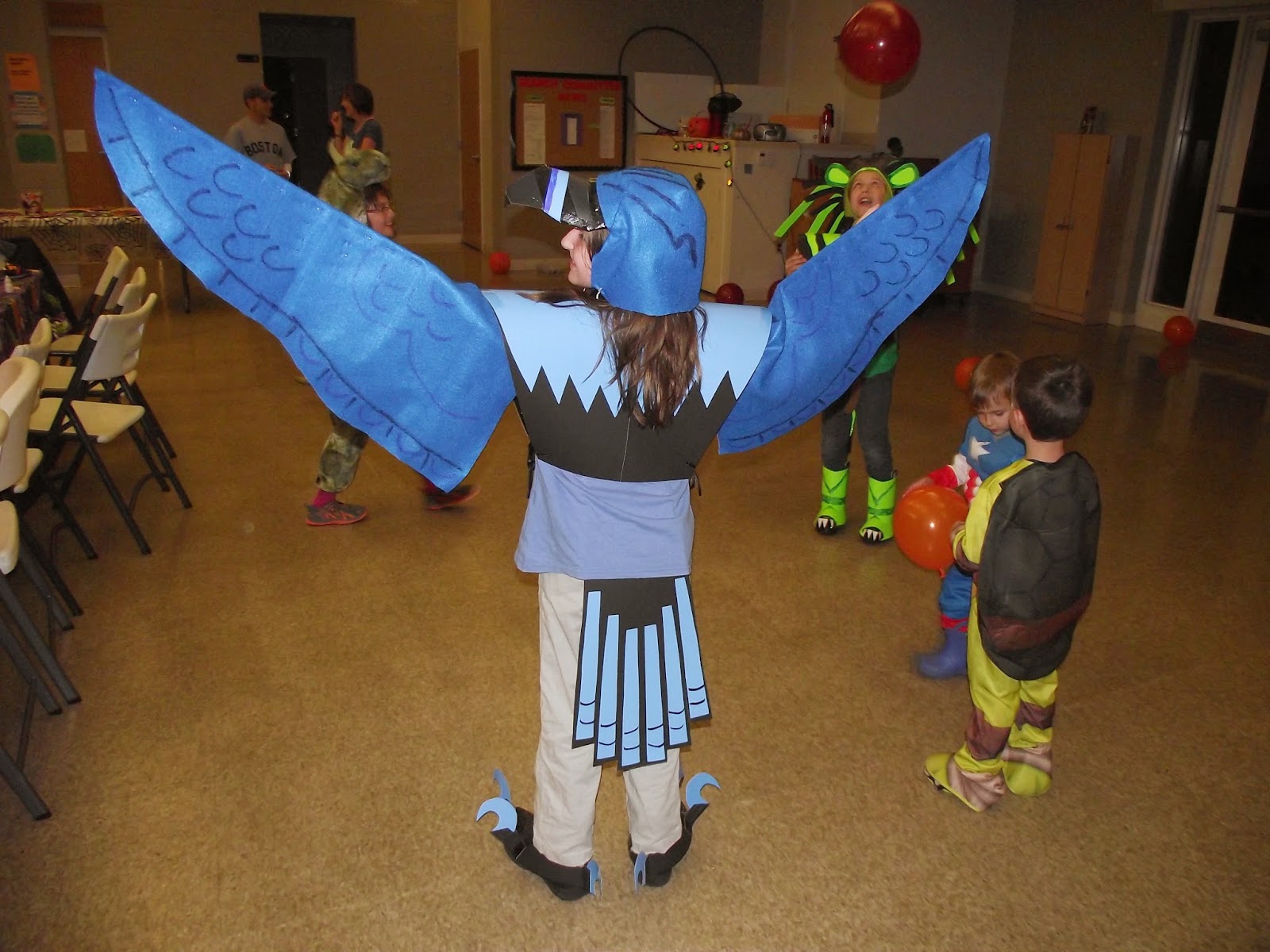 This year, my children had a new obsession: Wild Kratts. They wanted to be the Kratt brothers in their creature suits. The Blackbird wanted to be Martin as a (blue) peregrine falcon, and the Owl settled on Chris as a (green) lion. These costumes took some time to build: I fashioned creature suit vests and tails from posterboard, falcon wings out of posterboard and felt, a lion's head out of cardboard and a stocking cap, and boot covers with claws and talons. Once again, I had very little time, energy, and inspiration left over for my own costume. But then my wife found a bag of costuming stuff I had forgotten buying dirt-cheap from a costume store last November, which included a set of "demon wings" (black tulle over shapable struts). Ages ago, I made a nightgaunt mask by adding horns to a black faceless mask, but never had wings I was satisfied with to go with it. Now I did, so all I needs was to make a tail. (I'll have to post photos of the nightgaunt later, after my friend sends them to me.)

It's far too soon to determine what costumes I'll make for next year, but there are a couple of ideas I've wanted to try for quite some time. One of these is the serpent person from the cover of Tales of Freeport, but that's a project that will need far more than just one month of prep time! It's also a costume that I would love to wear to GenCon when I finally have the money and vacation time to attend it again--which, as every year, I hope will be this coming summer. But that's in August, so I'll have to start on this serpent person costume by spring....