How to Cheat (at Building) a Dragon

Sometimes the easiest way to build the LEGO model you need for your game is to find someone who's already built it and copy theirs. Here are a few examples of dragons that I've built for my own fantasy games, based on models from official sets that I never owned.

My daughter and son are huge Minecraft fans, so as soon as the LEGO Group started offering sets based on the game, they both started lusting after them in their precious little ABS hearts. My daughter's first acquisition was LEGO Minecraft The End (set 21107) as a gift last year. This set includes a micro-scale Ender Dragon, which measures about 3" long. This is the perfect size for a Large-sized d20 miniature, so I built a couple copies out of my own bricks: 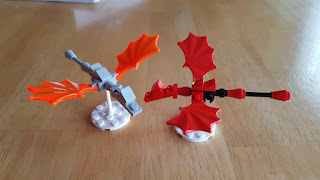 If you look at the pictures of the original (see that set link above), you'll see that I omitted the printed eyes plate (which I lack) and changed the orientation of the mini-slopes to fit my own aesthetic preference. This is a simple, elegant little model that makes excellent use of the dragon wing elements at a more realistic scale.

More recently, when I was perusing the new holiday 2015 catalog, I noticed that several of the new Ninjago sets from the Airjutsu storyline include brick-built dragons. Two of these dragons are the focus of large sets with numerous pieces that I would have trouble copying. In addition, those dragons would be grossly oversized as RPG miniatures for all but the largest Colossal wyrms. (Most brick-built dragons from older Castle, Ninjago, and Hobbit sets have this same issue.) However, some of the other new Ninjago sets include much smaller dragons that would be suitable for d20 scale. The smallest of these creatures comes with the Blaster Bike (set 70733), and is not much bigger than the micro-scale Ender Dragon. I downloaded the building instructions from LEGO.com, and built my own version: 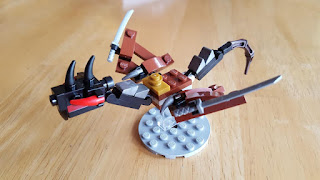 When copying this model, the rarest pieces needed are those A-shaped elements that form the wings, which have only recently been produced for the first time. However, I own Flinx's Ultimate Phoenix (set 70221, from the Legends of Chima line), which uses multiples of these pieces in its wings. Other than color, my only deviation from the instructions was the head crest; I only own the two-toothed plate in white, so decided to replace it with horns that better fit the new color scheme. This spiky model recently saw use in my Pathfinder campaign as a spire drake (Pathfinder Bestiary 4).

I also downloaded the building instructions for the next smallest Ninjago dragon, from Ronin R.E.X. (set 70735). The Ultimate Phoenix also supplied several parts for this model, most notably the flame-shaped wings and tail. My version has a couple of minor substitutions (part of a tail segment and the head crest): 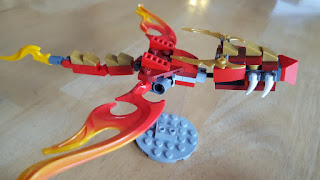 This model provides a nice Far-Eastern alternate to the classic Castle dragon, and is approximately the same scale, suitable for a Huge or Gargantuan creature. You could also replace the head with a more avian one for use as a smaller phoenix than Flinx's full-sized model. (A Pathfinder phoenix is Gargantuan, while the firebird spell from the Freeport setting summons a Large creature.)

To find free PDF downloads of the building instructions for a LEGO set, go to the Customer Service section of the LEGO.com website, and click on Building Instructions. This page will let you search by set number, keyword, year, or theme. When I searched for "dragon," I discovered the following additional sets with small models suitable for RPG miniature scale:

Do you have a favorite model (dragon or otherwise) from an official LEGO set that you've used as-is, or in slightly modified form, as a miniature in your role-playing games? If so, please let me know in the comments! I'm always on the lookout for new ideas to expand my own repertoire.
Posted by Tim Emrick at 6:18 PM 2 comments:

The deadfall beetle was inspired by a family trip to a state forest on the edge of the Arizona desert. Fallen trees scattered throughout the woods suggested bizarre, crouching monsters lying in wait for prey. I made a quick sketch then, and finished statting it up as soon as we returned home and I could consult my Bestiary.

I was finally able to use this creature in the most recent session of my Freeport game, which means that I can now share it here. Two beetles did not pose a serious danger to the party as a whole (who are now 8th level), but their bite was brutal enough to nearly take out the party ranger, who was unlucky enough to suffer a critical hit (which fell one point short of forcing my campaign's first save vs. massive damage!). I was quite pleased with my new beastie, who my players won't forget anytime soon.


BEETLE, DEADFALL
What you first mistook for a fallen tree now stirs, revealing itself to be a gigantic insect with legs and mandibles resembling twisted, dead tree limbs or roots. It rushes forward to attack.

A deadfall beetle is an ambush predator who waits near game trails or water sources for prey to come within its reach. When motionless in forested areas, its excellent camouflage makes it appear to be harmless fallen tree with several large branches remaining more or less intact. This insect is also a scavenger, and will attack other creatures in order to claim a large carcass for itself. In general, it will attack most Large or Medium creatures that it encounters while hungry. Smaller creatures are usually ignored unless they attack the beetle first or bar its way to larger prey.

Deadfall beetles are territorial, and will drive off other monstrous vermin except during the brief mating season. If a displaced beetle has to travel a long distance to find a new hunting ground, its offspring (if any) adapt to match the new location's tree species within a generation or two.

Some sages claim that the deadfall beetle is actually a monstrous version of the walking stick insect, and not a beetle at all. Few adventurers concern themselves with this distinction when faced by what appears to be an full-sized tree rather than a mere twig or branch.
Posted by Tim Emrick at 9:00 PM No comments:

The following creature is my own original creation. It was inspired by the highly organized feline army that Randolph Carter enlists as his allies in The Dream-Quest of Unknown Kadath, but lacks those cats' supernatural intelligence and their ability to jump through space to the Moon. (I may present rules for playing such a cat in a future column.)

In the Dreamlands, cats often band together for war against zoogs (Bestiary 3), alien cat monsters, and other hated enemies. The stat block below can be used to simplify combat against these cat armies.

A hissing, snarling mass of fur and shining eyes moves towards you. As it comes closer, you can discern that it is composed of hundreds of cats, with their claws and teeth bared and already bloody.

A cat swarm seeks to surround and attack any warm-blooded prey that it encounters.

Cats are naturally solitary hunters, and rarely swarm except under supernatural influences. These feline armies sometimes form in response to an infestation of vermin, or to mete out vengeance against those who have offended druids or cat-worshipers. A cat swarm is composed of about 300 cats.

Spellcasters who revere cats or cat-gods may (with the GM's permission) learn a variant of summon swarm that summons a cat swarm instead of bats, rats, or spiders.
Posted by Tim Emrick at 11:33 PM 3 comments:

Just a quick monster entry this time, as I've been busy and/or ill most of the past week.

This creature has been converted from The Complete Dreamlands (Fourth Edition, Revised & Expanded), for the Call of Cthulhu RPG.

This small creature looks like a levitating amoeba made out of water. It numerous pseudopods wriggle as it swims through the air.

Blupes are minor water elementals native to the Dark Dimension, as the Plane of Shadow is known within the Dreamlands. On the Material Plane, blupes are most commonly encountered when summoned by wizards and priests to combat fire-based menaces. (They have few effective attacks against other foes.) Spellcasters familiar with blupes may call one using summon monster I or summon nature's ally I.
Posted by Tim Emrick at 3:00 PM No comments: