Unearthed Arcana and Freeport, Part 11: Artificer 4.0 plus Even More Subclasses

Welcome back to my ongoing series of capsule reviews of "Unearthed Arcana" with an eye for how to use them with the Freeport setting. This time, we'll take a look at articles released in May through September 2019.

Note that the publishing schedule for UA is far more irregular these days, with only one new article in 2019 before those below. That means that, going forward, these reviews will be fewer and far between, even if I only cover a couple at a time, as I did in Part 10. (The very recent introduction of some new subclasses only a month apart looks promising for a brief uptick in releases, however.)

Artificer [The Artificer Returns] (5/14/2019): This article is an expanded version of the new iteration of the class released in February, making it the fourth version of the class to appear in UA. Two new subclasses and a handful of new infusions have been added, and the spell list now includes spells from Xanathar's Guide to Everything. The two new subclasses are the Archivist, who specializes in spells involving thought and knowledge and creates an artificial intelligence as a helper, and the Battle Smith, who focuses on protective enchantments and crafts a defensive construct companion.

Barbarian and Monk (8/15/2019): This installment provides two new archetypes, for two very different classes: the barbarian and the monk. The Wild Soul is a barbarian who is saturated with powerful magic, over which they have little control until later levels. It's very much a martial sibling to the Wild Soul Sorcerer. (I'm not sure whether multiclassing between the two would be awesome or obnoxious--or both.)

The Way of the Astral Self provides a way for a monk to manifest their true form using their ki. This astral form is mastered a piece at a time, starting with arms that deal radiant or necrotic damage, then later a mask (visage) that enhances their senses. Later levels enhance both the astral self's offensive and defensive benefits. This subclass seems best suited for an exotic, possibly psionic-flavored, monastic order, perhaps one started by a planar-traveling race such as the githyanki or githzerai.

Sorcerer and Warlock (9/5/2019): This month's article introduces the Aberrant Mind origin for sorcerers, and The Lurker in the Deep, a new patron for warlocks. The Aberrant Mind sorcerer has had an alien experience that warped their mind and body. This subclass gives them limited telepathy, psionic-flavored additional spells known, and (at higher levels) resistance to psychic damage. The physical changes provide some armor at early levels, and the ability to gain new movement modes or senses later on by expending sorcery points. 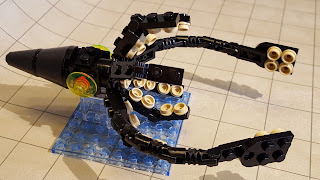 The Lurker in the Deep is an evolution of the kraken patron warlock that was designed during the debut episode of The Mike Mearls Happy Fun Hour many moons ago. The concept has been expanded to apply to other powerful ocean or elemental entities. In addition to an expanding spell list with water and weather-themed spells, this patron grants the ability to create spectral tentacles to attack your enemies. At higher levels, these appendages can help defend the warlock, and she can conjure more deadly manifestations of her patron's power. The warlock eventually gains some class features that make it easier to move through and survive in her master's watery domain.

Finally, this installment offers a new offensive cantrip, mind sliver, for psionic-themed sorcerers, warlocks, and wizards. Unsurprisingly, the entire article begs to be used in a Freeport campaign, where encounters with weird alien powers are distressingly common. The Lurker in the Deep is perfectly suited to Yarash and Dagon's cults, while an Aberrant Mind might have acquired her powers through an encounter with the Brotherhood of the Yellow Sign or other eldritch horrors.
Posted by Tim Emrick at 9:28 AM