"Time of the Tarrasque" is my current homebrew Pathfinder campaign. For an index of past session summaries, see The Story So Far.


Last time, our heroes discovered and explored an ancient ruin that was built by (or for) cyclopes. After fighting a giant skeleton, a weird elemental creature that emerged from the walls, and a trio of mephits, they discovered that the lowest level was a set of shrines to the four elements. Each shrine contained an idol of that element's giantish god, a central stepped pedestal, and walls carved with writing in the languages of both cyclopes and that shrine's element. None of these languages was known to our heroes, but they were able to determine that at least some of the inscriptions referred to tests or trials that would earn the blessings of the gods. Jumari experimented by burning something in a large brazier in the fire shrine, which caused that room's Ignan inscription to glow faintly.

Rather then wait until Fatou could prepare comprehend languages the next day, the heroes decided to experiment. To start with, the inquisitor went to the water shrine and cast create water over the dry basin set in that room's pedestal. This did not fill very much of the large bowl, but the Aquan characters on the walls glowed faintly in response.

Jumari then tried to blow upon the empty pedestal in the air shrine. Nothing happened, so Fatou tried using some cantrips to clean away the dust and attempt to cause a slight breeze. Edel tried singing, and when that had no immediate effect, the others attempted to join in to aid him (with less than stellar results). Jumari tried casting expeditious retreat so that she could run really quickly in circles around the shrine, but that too failed to produce any results. Jumari started asking the other two spellcasters if they had any air-based magic--perhaps a minor summoning spell?--but wracking their brains only led to the conclusion that none of them were experienced enough to use such magic yet.

The group then searched the earth shrine for any secret compartments, loose stones, or other clues. The pedestal here bore a polished sandstone pillar about the height of a man. ZhaZha tried placing a metal weapon on top, then some of the sand left behind when the wall-guardian was slain. Those had no effect, so Jumari suggested that the two of them try to lift it. This took a few tries for ZhaZha to work out her grip and leverage, but then the two half-orcs lifted it off of the ground a few inches. Fatou spotted something in a depression below the pillar, and Edel quickly pulled it out before the pillar dropped. It was a finely made heavy pick, which Fatou declared was magical [a +1 weapon]. Edel pointedly asked ZhaZha, "Is this yours?" and suggested that she leave her old pick in its place. She was reluctant to leave behind her favorite weapon, which had served her well up to now, but agreed.

The group then tried again in the shrines. Edel cast solid note in the air shrine, which finally made the inscriptions glow faintly. They then decided to try to trigger all four shrines at once. They waited for ZhaZha to go first, because lifting the pillar on her own would take even longer to accomplish without Jumari's help, and she was still somewhat fatigued from the first time. When the others could hear her growls turn from frustration to victory, they quickly made their own attempts: Edel sang in the air shrine, Fatou set kindling alight with burning hands in the fire shrine, and Jumari cast more create water. All three were rewarded by their location's script lighting up, but only Jumari's continued to grow brighter, as she cast her orison over and over to fill the basin. When the water reached the top, she could see a chain shirt of some fine metal at the bottom of the pool, and pulled it out. She hollered for Edel to keep singing, and he started drawing on his bardic powers.

Fatou soon gave up on trying to burn things in the brazier--she just didn't have enough flammables to fill its huge bowl. She pulled out the campfire bead she carried and activated it inside the brazier. The burning logs filled the space quite nicely, and the Ignan writing around her blazed as well. She could see something in the brazier, beneath the burning logs, so wet her arm as well she could with her own create water orison, then reached in to pull the object out. She burned her hand badly, but managed to drop the item--a red-hot falchion, with a blade shaped like a jet of flame--before truly maiming herself. As she created more water to quench the sword, Jumari came to her and healed her injured hand. Fatou then identified the weapon as magic [another +1 weapon] but failed to determine what magic the chain shirt held. She gladly let Jumari claim the falchion.

Everyone then joined Edel to try to help him. Two of the other shrines had seemed to react with being filled with something, so they tried to fill this room with the loudest song they knew--an orcish drinking song from ZhaZha's village. The Auran inscriptions started glowing again, and Fatou and Edel noticed a very tiny glow from the apex of the ceiling (about 20 feet above). Detect magic registered a faint aura of abjuration, but whatever the thing was, it was too far embedded in the stone of the ceiling to read its aura properly. Edel used an enlarge person scroll (that Fatou had just scribed for him the previous day) to make his tallest companion, ZhaZha, large enough to reach the ceiling. She used her new, magical pick to carefully chip at the rock around the spot her friends pointed out. Her patience soon grew thing, so she knocked out a dinner plate sized chunk of the ceiling with a couple sharp whacks with her weapon. The glow from the walls abruptly ceased, which caused Jumari to say, "I'm glad we did this one last!" The cavalier chipped away at her shard until she finally freed a small metal ring from the stone. Edel's spellcraft told him this was a ring of protection +1, and that the chain shirt was +1 mithral. This prompted some discussion about who to award these last two items. Edel and Fatou finally agreed that Fatou would take the armor, because Edel already had Ragalash's magic darkwood suit, and he would take the ring.

Edel changed his mind about ZhaZha needing to leave her pick behind, so she went to reclaim it. The heroes collected their other loot, and their camels, and rode back to the kobolds, who had been waiting a short distance form the ziggurat for the past couple hours. ZhaZha told them about the creatures they fought, and judged the place safe to enter now that it was cleared out--but neither she nor her friends mentioned any of their new magical loot. Because it was now getting light, the caravan's leader, Vartoranax, decided to seek shelter inside, and the kobolds took over some of the large rooms on the middle level to make camp.

Vartoranax and Tyrrentyg were fascinated by the unusually good condition of the artwork and inscriptions throughout the structure. The herald cast comprehend languages, then she and her boss spent quite some time exploring and discussing the site before taking their rest with the others. Fatou expressed an interest in stopping here for a day, and the kobolds agreed--Tyrrentyg especially wanted to study the site in more detail. (The two half-orcs, whose curiosity was already amply satisfied, spent the day practicing tactics instead.)

After that day of study, the caravan headed north again. Their route stopped at a couple of oases, and the next few days were uneventful, until the travelers reached the last oasis before the town of Dal-Raman.

[At this point, the PCs were allowed to start using their newly-advanced, 5th-level stats. All continued in their previous classes, with Fatou becoming a 2nd-level cleric.]

During Jumari's watch, the kobold sentries spotted some jackals sneaking about, but one guard hurled a sling stone at one of the wild dogs and scared them off. However, later that night, during ZhaZha's watch, her camel was spooked by something. A jackal-headed humanoid appeared and tried to put her to sleep with its gaze, but she resisted. The two kobolds on duty with her were attached by two other jackal-things; one collapsed, asleep, but the other resisted. Each monster was accompanied by a couple of jackals.

The sounds of ZhaZha fighting just outside his tent woke Edel, and as soon as he looked out of the tent, he recognized the monsters as jackalweres. His shout of "Cold iron!", and the conscious kobold's terrified screaming as it was wounded, quickly roused the rest of the camp. 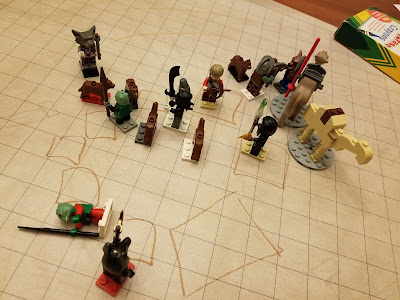 Jumari exited the tent and took up a central location in the center of camp so that she could hit all three jackalweres with blistering inventive [her new spell gained at this level]. She easily intimidated the monsters, and one of them caught on fire (though it soon extinguished itself). Because Jumari did not sleep in her breastplate, Fatou used her owl to cast mage armor on the riled inquisitor. However, one of the jackalweres put the half-orc to sleep with its gaze. Meanwhile, the third monster traded blows with ZhaZha, and came out much the worse for it.

As Edel began his bardic lecturing on jackalweres, some of the other kobolds finally emerged from their tents to join the fight--though not in time to save the wounded sentry, who was torn apart by (normal) jackals. Fatou dodged between jackals to deliver a burning hands that downed ZhaZha's jackalwere, so the cavalier charged another, killing it instantly with a critical hit from her pick. "This is a nice pick!" she exclaimed happily.

Edel woke Jumari, who recovered her falchion and endowed it with magical beast bane. However, Fatou took out the last jackalwere with a scorching ray, so the inquisitor led the clean-up fight with the jackals. Only one jackal escaped from the camp alive, and it tore off into the desert. Edel stabilized the only jackalwere who still lived, and they tied it up to question later.

Apart from the one dead sentry, who was wrapped up gently for now, the kobolds had only a handful of wounded. Fatou channeled energy to heal them and her friends. (She had suffered a few small bites herself.) Tyrrentyg recognized the jackalwere bodies for what they were, and reported what she knew of them to Vartoranax.

The rest of the day's watches passed uneventfully, but the heroes still have a severely wounded jackalwere on their hands...

This campaign uses fast progression, and I'm still trying to get the hang of the greater monetary awards required to keep the PCs on track for their wealth by level (Core Rulebook 399). These trials in the elemental shrines were an attempt to start rectifying the fact that they're very poor for their level, which seems to be my players' biggest criticism of the game so far. Finding that balance still needs a lot more work, but it's a start, and they all seemed pleased with their new toys.
Posted by Tim Emrick at 8:09 AM