Time of the Tarrasque #14: Family Matters 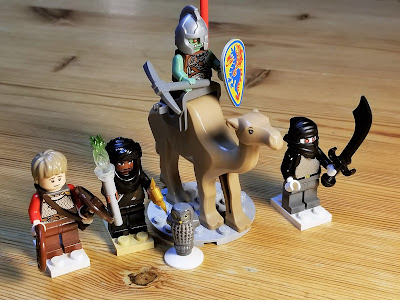 As I explained recently, we had a couple of players move away, and we will be continuing the campaign with a smaller group. I've also decided to retcon the PC death and reincarnation that occurred in our last session so that it affected one of those departing characters (Jubair, the rogue) instead of the one who actually died during play (ZhaZha, the cavalier).

Because of the many months since our last session, plus the party's need to adapt to losing their monk and rogue, I have allowed the players to make some changes to their characters. For some time, I had been considering using the background skills rules from Pathfinder Unchained, so implemented them at this point. That gave each PC (all currently 3rd level) six additional skill points, most of which went towards Knowledge skills and a little bit of the new Artistry and Lore skills.

Our bard's player decided to change his archetype from magician to archivist, which gave him back bardic knowledge, allows him to disable magical traps, and will give him jack of all trades in only two more levels. These changes greatly improve Edel's ability to fill gaps in the party's available skills. (The archetype's naturalist ability should prove invaluable, too. It certainly has for my wife's archivist bard in Pathfinder Society!)

The other continuing players made only minor tweaks to their characters. Apart from adding background skills, we had a few feat and trait changes, but nothing more extensive.

Our continuing heroes include:

(Now, on the the session! But first, a little rewinding...)

While the party was in Zahallan to sell loot gained from the orcs and buy the rare oils needed for the reincarnate spell, Lucretia (the zen archer monk) received a message. She did not share the contents of the message with her new friends, but explained that she would need to leave them, and did not know for how long. [Lucretia has ties to the military of the northern nation of Thovalas, and was summoned for a new mission. This provided a convenient built-in way to explain her leaving the party.]

During the return trip to Zahallan, Fatou asked Jumari about what religion she followed. The inquisitor explained the basics of the cult of the Lost Egg. [With the retcon, ZhaZha was present for this discussion, but decided to keep her own perspective on the Tarrasque to herself, so we did not need to replay that scene from last session.]

The party returned to Spine Hollow, and gave the oils to Razima, the settlement's chief druid. She cast reincarnate on Jubair's remains, and he returned as a gnome with light brown skin and dark hair. The ordeal left him feeling miserable, and he was horrified at his dramatically smaller body. [Jubair is used to being tall and very strong, and is suffering from negative levels from coming back from the dead.] Jumari tried to assure him that being a gnome was nothing to be ashamed of--they were a noble race. Edel made a joke in Gnomish--and Jubair was surprised to find that he understood it. The rogue was soon distracted, though, with obsessing over eggs--he craved eggs, and couldn't stop thinking or talking about them. He also dreamed about eggs during his first night's sleep back among the living.

This talk of eggs unnerved Jumari a bit, given that Jubair was her first convert--albeit a lukewarm one--to the Lost Egg, before she shared that information with the rest of the party. She spent some time talking to him about it, and offered to take him to her teacher. She didn't think her teacher could cure the lingering after-effects of Jubair's revival, but he might be able to help make sense of Jubair's dreams.

Jubair had been given halfling-sized clothing immediately after the reincarnate ritual. Over the next couple days, the druids of Spine Hollow helped him exchange his weapons, armor, and other gear for items more appropriate to his new size.

Jumari made a habit of commemorating significant events with tattoos, so offered to give Jubair one. He agreed, and they settled on a scorpion inside the outline of an egg. Jubair asked for it to be placed on his calf, so that he could always have a scorpion in his boot that couldn't sting him. He seemed to think the idea would help ward off his usual bad luck with such vermin.

Jumari informed the others that she wished to visit her family, and believed Jubair needed to speak with them. (ZhaZha opined that it was a better idea than visiting her home, where outsiders tended to be killed to ensure the settlement's safety.) The inquisitor wasn't sure where she would find her family, as they tended to move around frequently. She decided to try the closest of their two favorite haunts, located on the Zahal River downstream from Zahallan. If that didn't work, she would try a different hideout on the other side of that town. Either way, the party could easily return to Zahallan afterwards, or between stops.

The inquisitor easily navigated south through the hills to the river, a journey of a couple days. Towards the end of the second day, they reached the river, but could not see it until they crested a rocky rise parallel to it. Then they could see half of a barge that had been broken on the river's rocks, and pulled well clear of the water for the safety of other water traffic. That ruined boat had been turned into a sort of squatter's hut, and soms of the PCs spotted signs that it was currently or recently inhabited. As they approached, the could see a Jubair-sized person hiding in the shadows of the boat's interior, with a crossbow trained on their group.

Jumari unwrapped her head covering to show who she was, and the man relaxed and came out. He was a gnome, tall for his race, with wiry gray hair and tattoos of eyes, circles, and similar designs all over his face. Jumari made introductions--this was Morganox, her adoptive father and teacher in the ways of the Lost Egg. She explained to him that Jubair had been human until a few days before, was reincarnated as a gnome, and now had dreams about eggs, so she had brought him here. This amused Morganox greatly, but he did not explain why (yet).

Morganox invited the party inside to join the evening meal with him and his other daughter. Jumari's adopted sister was Banuqa, a human woman who kept herself as carefully wrapped up as Jumari did, but for somewhat different reasons--extensive plague scars could be seen on the visible parts of her face and hands. Over the meal, Jumari told Morganox about what had happened to Jubair, and about the rest of her adventures with her new companions. The gnome was very pleased by their efforts against the death cult. He offered to take care of Jubair for a while while the rogue adjusted to his new body and learned more about the Lost Egg. Morganox revealed that he had once been an orc from one of the Tarrasque-cult tribes. He was reincarnated by a powerful orc witch, but when he came back as a gnome with visions of the Lost Egg, she tried to kill him. He narrowly escaped with his "much shorter life." (This phrase confused ZhaZha, who thought gnomes lived longer than orcs. Edel suggested an improvement to Morganox's size joke in Gnomish, which the priest appreciated.)

ZhaZha asked which tribe Morganox was from, and he replied that it was the Hornback Tribe. They control The Horns, one of the most holy sites of the Tarraqsue cult. He has not dared to go within 50 miles of the place since his escape. He knows little about the tribes that worship the death god, other than the fact that they exist and that the Tarrasque-worshipers usually seek to wipe them out. (The Ghost Fist warlord Yazdanyar's name was unfamiliar to him.)

The PCs' talk then turned to how to find more information about the death cult, so that they could track them down and deal with them more permanently. Their thoughts included:


The group decided to spend the night at the ruined barge. In the morning, they said their farewells to Morganox, Banuqa, and Jubair, then followed the river west to Zahallan.

As Fatou led the way to the Temple of the Moon, she told her new friends a bit about her own family. Her father (a wizard with his own school) expected her to follow in his footsteps, rather than her late mother's (a cleric of Yaziel). When she left home, she left him a letter explaining her desire to see more of the world; she didn't tell him in person because Father always wins arguments. She guessed that her brother Balban would understand what she'd done, but he's a little older and tends to stay put in his alchemy lab.

(This was followed by some joking discussion, more or less in-character, about just how much Fatou's friends wanted to scandalize her father--for example, by giving him a half-elven grandchild. Fatou does find Edel very handsome, but hasn't really pursued anything beyond some hesitant flirting.)

When they arrived at the temple, Fatou found the letter from her father that she had been dreading--but she didn't expect her brother to be the one sent to bring it to her. He had arrived a few days before, and had been told of her new status as a cleric by the mullah. While Fatou and her brother talked, the others withdrew a short ways and pretended to not be paying attention to them.

Balban explained that he was sent because Father's duties wouldn't let him leave the school for long. Buthayna, a friend of the Damiri family and a mentor to Fatou, had tried to talk to Father on her behalf, but Balban was uncertain whether it had helped. But apart from the situation with Fatou, Father was well.

Fatou showed Balban the alchemist Jibral's formulary and the oil of decompose corpse, and briefly explained how she and her friends had acquired them. This distracted him from further surrogate badgering. From a cursory examination, he agreed that some of the writer's research was disturbing--and certainly outside what Father would allow in his school. This intrigued Balban, and he promised to study it further and let Fatou know if there were any clues that she could use in her own investigations.

Balban needed to return home, now that he had delivered the letter.  ZhaZha chimed in to ask if their father would be upset if Balban didn't go home right away. He replied that he would wait a day or two while Fatou composed a reply. He suggested that his sister may want to ask the mullah to write to their father, too.

(Fatou's reply will restate her intention to not return home at this time. She has learned a great deal at the temple, and plans to keep exploring her mother's path.)

Leaving Balban, Fatou went to go speak with the mullah...but that conversation will be part of our next session.