The Forge of Fury #1: Orc Gruel

Over the holidays, I was able to find time to start running The Forge of Fury for my wife and children. This is my summary of our first session; I'll post session #2 next week.

Last time, the party completed The Sunless Citadel (the first adventure in Tales from the Yawning Portal). The gnome cleric who they rescued, Erky Timbers, has joined the party as a full member, and most of the party has upgraded to more protective armor. Our heroes for The Forge of Fury now include:

During there adventures in the Sunless Citadel, the party found a fragmentary scroll that mentioned "Khudrukar" and "Durgeddin the Black." After some research, they learned that Durgeddin, a highly skilled smith, founded the dwarven stronghold of Khundrukar after his tribe's previous home was overrun by orcs and trolls. From this secret home, he sought vengeance for his fallen kin, and forged many blades in pursuit of this goal. Eventually, the orcs found Khundrukar and mined its defenses. The stronghold was sacked, but rumors persist that some of Durgeddin's blades remain within. The party has determined that Khundrukar must be located near a rocky prominence known as the Stone Tooth. This peak is located in a dense forest a few days' journey north of the mining town of Blasingdell.

They reached Blasingdell, and sought out local dwarves for any information on the Stone Tooth or Khundrukar. One shopkeeper told them of recent orc raids near the town. One wounded orc was captured and interrogated, and revealed the location of his tribes' lair near the Stone Tooth. In order to deal with this new threat, the mayor of Blasingdell was offering a bounty on orcs, dead or alive. When they inquired about this bounty, the mayor told the adventurers that most raids of outlying farms involved a mere handful of orcs, so they don't know the tribe's full numbers.

The party got directions to the Stone Tooth, and made their way north through forested hills. When they spotted the peak, they could see a path climbing the near side of the hill, and smoke issuing from some place near the summit. The heroes found a safe, defensible campsite for the night, before following the path.

In the morning, when they reached the trail, Dain claimed that the path had once been concealed, but the hillside had eroded enough of its cover to allow it to be seen from the valley. They followed the trail for a while, until it was clear that it did not go to the same point where the smoke issued from. They wanted to find the source of the smoke, so climbed the steep hillside towards it. They soon got lost in the trees, but were able to regain their bearings after an hour and reach the smoke. It came from a natural chimney in the rock, which looked difficult to climb down without a rope. They debated whether to risk it, but then decided to search for an easier entrance. 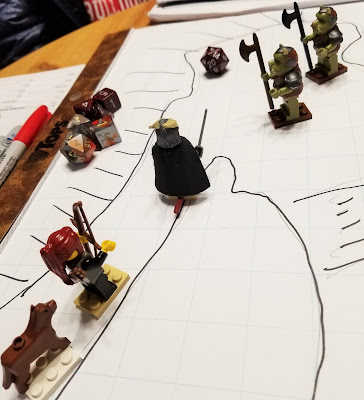 They returned to the path and followed it up to a ledge where two inattentive orcs stood guard. Raven and Kalitni attempted to sneak up on them, but the ranger made too much noise, and the orcs hollered a warning. Xuri used her new wand of entangle to slow down the two orcs, then Raven (who had successfully hidden near the ledge) sneak-attacked one orc. Another spell and an arrow from Erky killed the other.

The rogue advanced around the switchback and noticed three concealed arrow slits in the rock face above her. She warned the others, and Xuri used her wand to entangle the area behind one of these arrow slits. The orcs inside the archer stations, having been alerted to the presence of enemies, started to shoot down at the heroes, who did their best to minimize their exposure on the open stairway. (As a sharpshooter, Kalitni was able to target the orc archers with no worries about their cover.)

The party found a grand entrance at the ascending path. They had taken down the first sentries very quickly, and reached the chamber beyond the entrance before the archers could get off more then a handful of shoots each. In this chamber, they found a 30-foot wide natural chasm spanned by a rope bridge. On the far side were two more orcs, who started hurling javelins at the party--or more specifically, at the hated dwarf. (However, the chasm put their targets at long range, so no javelins hit their mark.)

Once some of the heroes reached this chasm chamber, and were thus out of view of the arrow slits, one of the orc archers used a secret door to attack more directly. However, Raven was hidden right next to the door, and waylaid the orc.

The rogue, ranger, and paladin took the fight to the archers, with Kalitni mostly concentrating on the orcs on the other side of the chasm. After her arrows downed one, the other fled through the doors behind its post. Meanwhile, Dain had located another secret door on his side of the ledge, but could not open it, so began using Shatterstrike (the magic longsword he had received from the dying Sir Braford) to smash through the stone. However, before he finished, he broke off to help his companions slay the orcs they could reach.

Once all the orcs were dead (excluding the one who escaped), the party conducted a quick search of the rooms around the entrance, and collected orc ears to claim their bounty. Xuri crossed the rope bridge, but could not see or hear anything from the doors on that side. She rejoined the party when Kalitni found a secret door in a room off of one of the archer stations. This led to a short passage and another secret door.

Beyond that second door was an empty barracks for about a dozen humanoids, that showed signs of being recently vacated. Apparently the orcs were not aware of this well-hidden passage, and had gone elsewhere in response to the alarm about intruders. The heroes passed through this room quickly, finding a larger hallway beyond it. They passed a statue of a dwarf (strangely undefaced, considering the current inhabitants), and a large ironbound door with a human skull staked to it. Raven and Erky heard growling behind this door, so left it alone for now. The hallway eventually led to a natural cavern filled with a vast number of crates, barrels, and sacks of unknown goods. From here, Raven could hear speech coming from the south (roughly in the direction of the chasm chamber). The speaker had a loud, booming voice, and was berating the orcs (in Common) for cowardice in dealing with the invaders. The tiefling warned the others, then stealthily moved closer to learn more.

The next room held a number of orcs, as well as their leader, a ten-foot-tall giant. She could also see the door to a wooden cage on the far side of the room, in which two prisoners cowered. As she watched, the giant ordered the orcs towards the chasm. She counted ten orcs, including one wearing plate armor. 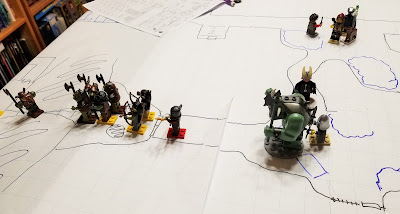 Dain moved up, no longer caring for stealth, and cast shield of faith on the rogue before closing with the giant. Erky cast bless on them and Kalitni. The ranger moved forward to see the giant, and recognized it as an ogre. She cast hunter's mark and shot the boss monster. Xuri followed with a witch bolt. 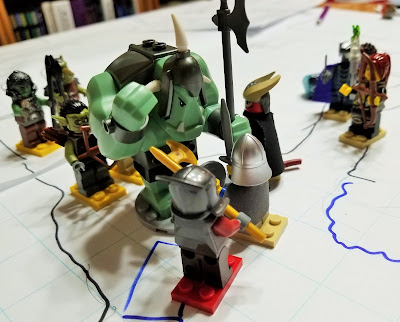 The ogre roared, "Great Ulfe smash stinky dwarf!" It missed the dwarf, but the heavily-armored orc (an orog) hit Dain hard. Raven sneak attacked the ogre, which drew its ire, and it smashed her to the ground--but suffered a hellish rebuke in retaliation. A divine smite from Dain downed Great Ulfe, and Erky (protected by sanctuary) channeled divinity to heal the paladin and revive the rogue. 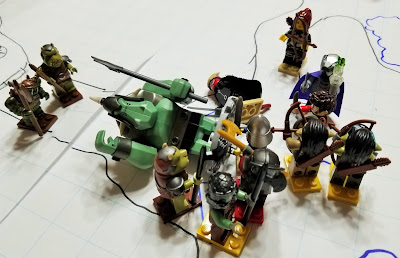 Kalitni turned her 'mark upon the orog, and Xuri used entangle on him and some adjacent orcs. Hits from the rogue, paladin, and ranger soon took down the orog. 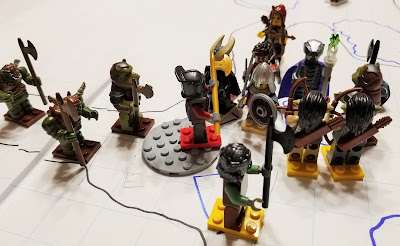 More orcs poured into the room, swarming the party. The fight became quite desperate at this point, as lucky hits from orc greataxes knocked out Raven, Xuri, and Erky (whose last spell healed the rogue again), and seriously wounded Dain and Kalitni. However, the orcs took heavy losses as well, and eventually only four were left. The three nearest the exit disengages and fled towards the chasm chamber. The fourth took Kalitni down with a critical hit before leaving by another exit--but ran into the ranger's wolf, who mauled it.

Raven, furious at seeing her companions hurt, pursued the orcs. She killed one, and caught up to the other two as they were crossing the rope bridge. She jumped onto the near end and began shaking the bridge. This caused one to lose his grip and fall into the chasm.

Meanwhile, Dain healed Erky, who then healed Xuri and Kalitni. (The ranger narrowly avoided dying only through using inspiration on a death saving throw.) Xuri joined Raven, and cast a spell at the remaining orc. Her witch bolt failed to hit, but the resulting wild magic surge mortally wounded it (and hurt Raven) while healing the sorcerer.

The fight was finally over, after 31 grueling rounds of combat since engaging the first sentries. Dain smashed the padlock on the cage door, freeing the prisoners, a pair of humans. As the heroes searched the room and rested for a while, Geradil and Courana told their story: They were from a small settlement near Blasingdell, and had been captured about a month ago. Their families could not pay the ransom the orcs demanded, so it was only a matter of time before the orcs would have killed them. They warned the party about the ogre's pet wolves (who were much bigger then Kalitni's companion) and a scary one-eyed orc priestess. (The ranger realized that this must be a priestess of Gruumsh, the leader of the orc pantheon.)

The heroes took orc ears (and the ogre and orog's heads) as trophies to claim bounties when they returned to Blasingdell, then pushed the bodies into the chasm. Geradil and Courana were anxious to return home, but most of the party wanted to finish clearing the orc lair before leaving the dungeon. However, all of them desperately needed sleep and healing, so they went back to the barracks room, where they staked and barricaded the door. (This room's secret passage would give them an escape route if necessary.) The dwarf knight considered the possibility of having his retainers (who awaited the party back at their campsite outside) escort the two villagers home in the morning.

Tales from the Yawning Portal: Past Columns