After a long rest, the party set out again. At the end of the last hallway they had explored, they listened at the door and heard whimpering. The door led to a room that contained a wrecked cage, a small makeshift altar with trinkets upon it, a firepit, and Draconic script painted on the walls. The miserable noises came from a kobold named Meepo, who was devastated at the loss of his clan's dragon, Calcryx. Goblins had attacked, killed many kobolds, and kidnapped the wyrmling. Once the dragonborn sorcerer calmed him enough to get this much information, Meepo offered to take them to see his leader, Yusdrayl. When they encountered other kobolds, Meepo gave the password to get safe passage, and they were escorted to the leader. Yusdrayl asked the PCs to retrieve Calcryx, and offered a reward of two items from the clan's hoard. One of these objects was a key held in a sculpted dragon's mouth, which the PCs very much wanted in order to pass the dragon door they had found in another part of the dungeon. They therefore agreed to the quest, and Meepo was sent with them as guide to the "back way" to the goblins' territory.

This route led back through the dragon's former room to some abandoned hallways. In one room, the party found a door with the inscription, "Rebuke the dead, open the way." Sir Dain attempted to open the door and was hit by a scythe trap. (This made the party much more wary, and the rogue was much more rigorous about searching for traps going forward!) Raven Flare tried to pick the lock but was unable to do so, and guessed that this was another magical lock. Unfortunately, nobody in the party had the ability to turn undead, so they had to return to the "back way" route. 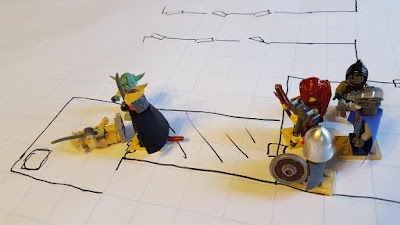 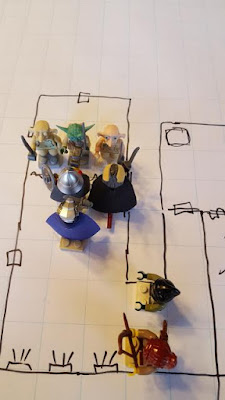 Soon after, the party found a door that was trapped to ring an alarm bell, but the rogue was able to open the door carefully enough to not ring it. Beyond was a hallway strewn with caltrops, with a low, rough way built across the far end. Raven Flare quietly made her way to the wall, and saw two goblins lurking beyond it. She took out out with a single surprise thrust, then the rest of her party moved forward to help fight the other one. The goblin moved to the exit from its watch station and hollered a warning before they could kill it.

The next room had a similar set-up, with three goblins behind a low wall. These were alert now, but Sir Dain led a rush of their position, and the goblins failed to hit him with their arrows. Even the sorcerer Xuri landed a close-up hit, taking down one of the goblins with her dagger, and Meepo got in a lucky hit with his cling to kill the last one. Xuri praised his shot, and asked if he wanted to take an ear as a trophy--an idea that thrilled their easily-frightened guide.

One of the doors from this room was locked, but one of the dead sentries had the key. Inside were four prisoners: three kobolds tied to a stake, and a gnome in a small cage. Meepo freed the kobolds, who promptly fled back towards their clan's halls. Raven Flare picked the lock to the cage, and the gnome introduced himself as Erky Timbers. This acolyte had been captured by goblin bandits some months ago, and held here since. If not for the blessings of his god, Garl Glittergold, he would have died of wounds or starvation long before now. 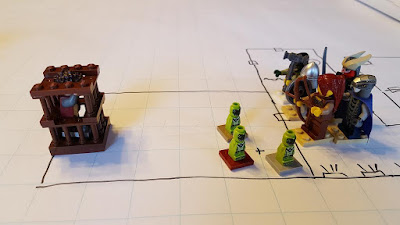 Erky was able to answer some of the party's questions about the dungeon: The goblins captured three human adventurers some weeks back. Their names were Talgen, Sharwyn, and Sir Braford--three of the four missing adventurers the party had been told about. They were held here for a time before the goblins took them elsewhere--to their leader Belak. Erky had heard the goblins talk about Belak's Twilight Grove down below, and the Gulthias Tree that bore the fruit that they sold, but beyond that, he only knew that the goblins feared the place.

The party invited Erky to come with them, and he readily agreed. His equipment had been taken, so they armed him with a dagger and javelin, and Xuri cast mage armor upon him. The gnome could cast a few spells, including cure wounds, so provided some healing on the spot. The heroes asked if he could turn undead, and he confirmed that he could. Between his lack of gear and lack of athletic skills, Erky followed at the back of the party as they continued on.


The party found another locked door a couple rooms later. The rogue picked the lock, and they opened the door to a room filled with trophy heads, smashed furniture, a broken chain, and patches of frost. This got Meepo excited, because he could tell Calcryx had been here. In fact, as soon as Sir Dain entered the room, the white dragon wyrmling showed itself, demanding that they leave, but leave the kobold with her. When asked if she planned to eat him, she gleefully admitted it. She did not want to go back to the kobolds, who were far more pathetic than the goblins. The party tried to talk further, but the dragon grew bored and attacked. She tried to bite Sir Dain, but missed. Raven Flare and Kalitni entered the room to maneuver around and flank the dragon. Calcryx drew an attack from the rogue as she moved to the side, but survived the blow and let loose a blast of freezing breath. Raven, Dain, and Xuri were caught in the cone, but all saved against the attack; this meant that although the tiefling and dragonborn fell unconscious, they weren't killed outright. Sir Dain knocked out the dragon with his hammer, but refrained from a killing blow so that they could keep their bargain with the kobolds. Erky and Dain revived the fallen heroes, who then helped the party bind the dragon and search the room.

Among the dragon's few treasures was a scroll case labelled "Khundrukar" in Dwarvish. The scroll inside was mostly destroyed by age and water, but a few enticing fragments could be read. Dain recognized the name on the case as that of a secret dwarven stronghold, and hearing the name reminded Xuri of a tale of a failed expedition that had sought wondrous arms and armor there. [This item is a hook for the next adventure in the Tales from the Yawning Portal anthology.]

The party now had to weigh their options: return the dragon to the kobolds now, or try to push on exploring a bit more first? They knew they were well into goblin territory now, and might encounter many more of them at any moment. But if they left now, they would have to fight their way back through goblins who would be waiting for them next time.

The party decided to check the other exit from the dragon's lair first. This led to a hall where Dain spotted a trapdoor just outside the room. He explained how to get past it safely, and the party moved on to a door further down the hallway. This room held 3 goblins, which the party managed to catch by surprise. Raven Flare was knocked out (again!) before the goblins were finished off.

Recovering from this fight used the last of the party's healing resources, so they decided to retreat with the unconscious dragon in tow. Along the way, Sir Dain used a crowbar to pull down the crude walls at the two watch posts, while his companions collected the caltrops from the first of those hallways for their own use. They also took the alarm bell--which Xuri tied around the comatose dragon's neck.

Meepo proudly led the way back to Yusdrayl's throne room, and reported on the heroes' impressive prowess. The kobold clan's leader thanked them for their deeds, and gave them their choice of two treasures. The party chose the key from the dragon sculpture's mouth, and a flask with multiple doses of elixir of health. Meepo remained with his people to tend to the dragon, and the party took their leave and retreated with Erky to "their" secret room to rest and heal.


The party has reached 2nd level! Raven Flare can now use Cunning Action, but doesn't gain any additional abilities until 3rd. Xuri now has sorcery points, and added a new spell to her repertoire. Kalitni and Dain acquired fighting styles (archery and protection, respectively); they also now have access to spells, which will give them more options with both attacks and healing. (As an NPC, Erky will not advance unless he decides to accompany them after this adventure. He is only a 1st-level spellcaster, but has more Hit Dice than the PCs do.)

Edited 10/10/2017 to add a photo of my kobold minis for this adventure, which used a variety of reptilian Star Wars aliens and Chima Crocodile Tribe characters: