Expedition to the Barrier Peaks 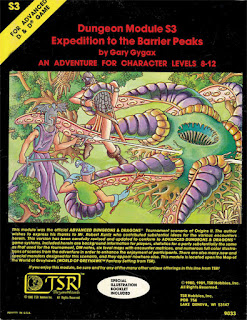 One of the most bizarre products ever released for AD&D was the 1st edition module S3, Expedition to the Barrier Peaks. In this adventure, the dungeon is a vast, crashed spaceship, buried in the mountains until a recent tremor uncovered one of the exits. This vessel is packed with alien creatures and futuristic technology, all left to run amok after the ship's crew died countless years ago.

Because of its bizarre environment and weird denizens, S3 was one of the first RPG modules to include a booklet of illustrations. This booklet was as thick as the adventure itself, and included a handful of color pages, making this the most lavishly produced AD&D adventure at the time, and for several years afterward. The interior art and illustration booklet featured many of TSR's most prolific artists, including Jeff Dee, but the overall look was dominated by Erol Otus, who did the cover and most of the brand-new monsters.

I once tried to run this module using the AD&D 2nd Edition rules. As written, the adventure starts with the Duke of Geoff recruiting adventurers to investigate rumors of strange monsters in the mountains, but that sounded far too cliched for my taste. Instead, we used the Complete Book of Humanoids to create a party of evil humanoids banding together to beat the pesky low-landers to the rumored treasure. The game only lasted a couple of sessions, for a number of reasons: first, the party didn't work well together (in retrospect, I didn't give them enough motivation to be allies) and second, the adventure itself was far larger and more unwieldy than I was used to.

Despite that first attempt fizzling out, this adventure is far too cool and weird to not want to try again. I would definitely use a more recent edition of D&D (or possibly a d20 variant) because I am no longer familiar enough with the 1st or 2nd edition rules to use them again after all this time, or to want to. However, which system I end up using will very much depend on what my group is playing if and when I carry through on running Expedition.

Many of the new creatures from S3 were reprinted in the 1st Edition Monster Manual II, and those selections were later converted to Third Edition in The Tome of Horrors. Necromancer Games has since released v.3.5 and Pathfinder versions of this bestiary.

After the release of d20 Modern, d20 Future, and Future Tech, an article on the Wizards of the Coast website discussed how to introduce some of the items from this adventure into a D&D game. "Return Expedition to the Barrier Peaks" gave rules for future tech weapons and armor, as well as converting one of the robots featured in the module to D&D v.3.5. Since then, I have tried my hand at converting the rest of the monsters to v.3.5 (and later found a fan conversion of the full adventure online).

Thanks to the Tome of Horrors being Open Game Content, Paizo was able to include the froghemoth and vegepygmy in the first Pathfinder Roleplaying Game Bestiary. At least one more S3 monster has appeared in a later volume. One of the Pathfinder Adventure Paths involves alien tech appearing in a fantasy world, which spawned a couple of future tech sourcebooks for the system. Those books (or the online SRD) might be useful for converting elements of Expedition to the Barrier Peaks, and, of course, there is already at least one full-length fan conversion out there.

D&D v.3.5 and Pathfinder are far crunchier systems than 1st Edition, so running Expedition to the Barrier Peaks with either one would require me to track far more information. (Both those fan conversions I mentioned have at least double the page count of the original module, and that's just for the stat blocks and other game mechanics.) That complexity can make for a very rich gaming experience, but can cause some real headaches at times. For example, combats usually take longer than in previous editions, and this dungeon is packed to the rafters (and beyond) with hostile creatures.

I never played or liked Fourth Edition enough to consider running it myself, so let's move on.

I'm still learning Fifth Edition, but the complexity and feel of the rules are a lot closer to 2nd Edition than to Third--it has something of a nostalgic or "retro" feel  but still offers a robust diversity of options. That makes it an attractive option from the perspective of character creation and game play, and the Dungeon Master's Guide even includes a (tantalizingly brief) page on alien technology. On the other hand, I would need to build at least half the monsters in the adventure from scratch, and I'm certainly not up for that challenge...yet. (I would have the same problem with converting this adventure to any non-d20 system--and then it wouldn't be D&D, which misses much of the point of the experiment.)

After some web searching, I've discovered that during the D&D Next playtest (for what would become Fifth Edition), Wizards of the Coast produced a conversion of Dungeons of Dread (a collection of the modules S1-S4). Unfortunately, this playtest packet doesn't seem to be available anywhere online since the final Fifth Edition rules were released. Maybe by the time I can track down a copy of that packet, I'll be familiar enough with the new rules to be ready to run an 8th-12th level adventure in this new edition.

[UPDATE October 2016: Thanks to one of my readers, I now have a copy of the DoD playtest packet.]
Posted by Tim Emrick at 10:23 PM