Time of the Tarrasque: Dust Mantis 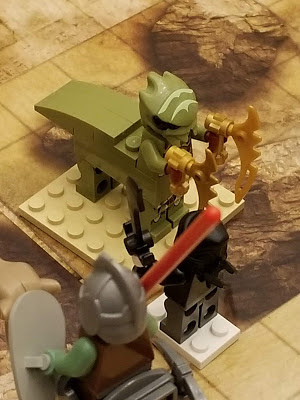 The following monster appeared in session #16 of my "Time of the Tarrasque" campaign ("Gorza's Well").

The dust mantis is a giant mantis with the dust creature template applied, plus one additional change: its environment has been changed from temperate forest to temperate and warm deserts.

This horse-sized creature looks like a giant insect made out of sand, with two large scythe-like claws.

XP 1,200
Dust giant mantis [Advanced Bestiary 131; Pathfinder RPG Bestiary 200]
N Large outsider (air, earth, elemental, extraplanar)
Init +2; Senses darkvision 60 ft.; Perception +6
Defense
AC 16, touch 11, flat-footed 14 (+2 Dex, +5 natural, -1 size)
hp 38 (4d10+16)
Fort +8, Ref +6, Will +3
Defensive Abilities air mastery; Immune elemental traits, mind-affecting effects
Offense
Speed 30 ft., climb 20 ft., fly 40 ft. (poor); airborne
Melee 2 claws +4 (1d6+1 plus grab)
Space 10 ft.; Reach 5 ft.
Special Attacks desert blast (20-ft. line, 2d4 slashing, Ref DC 16 half, 1/1d4 rounds), exude dust (DC 16), lunge, mandibles, sudden strike
Statistics
Str 12, Dex 15, Con 18, Int --, Wis 14, Cha 9
Base Atk +4; CMB +6 (+10 grapple); CMD 18 (22 vs. trip)
Skills Climb +9, Fly -4, Perception +6, Stealth +2 (+14 in desert); Racial Modifiers +4 Perception, +4 Stealth (+12 in deserts)
SQ air breather, airborne
Ecology
Environment temperate and warm deserts (and Elemental Planes of Air and Earth)
Organization solitary
Treasure none
Special Abilities
Air Breather (Ex) A dust creature can breathe air, even if the base creature breathed only water.
Airborne (Su) At will, a dust creature can walk on air as though with an air walk spell. In addition, it always falls as if affected by a feather fall spell. When falling, the dust creature can be moved on the wind as noted in the description of the air walk spell.
Air Mastery (Ex) Airborne creatures takes a –1 penalty on attack and damage rolls against a dust creature.
Dust Blast (Su) Once every 1d4 rounds, as a standard action, a dust creature can emit an abrasive jet of dust-filled wind that damages objects and other creatures. This wind takes the form of a 5-foot-wide, 20-foot-long line that causes 1d4 points of slashing damage per 2 Hit Dice (minimum 1d4, maximum 20d4). Any creature caught within the area may attempt a Reflex save for half damage. The save DC is Constitution-based.
Exude Dust (Su) At will as a free action, a dust creature can exude a cloud of dust that surrounds its body in a 10-foot spread. This cloud functions like an obscuring mist spell, except all dust creatures can see through it normally. Any other creature caught within in the cloud must succeed on a Fortitude save or be blinded by the stinging dust. Creatures that close their eyes or have them covered before the dust could affect them gain a +10 circumstance bonus on the save roll. A creature that enters the dust cloud with its eyes closed or covered need not make a save against blindness unless it opens its eyes while within the dust cloud. A creature blinded by a dust creature's cloud of dust regains its sight 1d4 rounds after its last exposure to a dust cloud with its eyes open. Blinding exposure of even a single eye blinds all eyes supernaturally. This is a blinding effect. The save DC is Constitution-based.
Lunge (Ex) A dust mantis's limbs are capable of reaching much farther than normal for a creature of its size. As a full-attack action, it can make a single attack with its claws at double its normal reach. When a giant mantis attacks with a claw in this manner, it gains a +4 bonus on its attack roll. A giant mantis cannot make attacks of opportunity with its lunge.
Mandibles (Ex) A dust mantis that grabs a foe can make a bite attack against that foe as a secondary attack. The mantis's bite is a -1 attack that inflicts 1d6 points of damage on a hit.
Sudden Strike (Ex) A dust mantis is particularly adept at moving quickly when its foes are surprised. During a surprise round, a dust mantis may act as if it had a full round to act, rather than just one standard action.
Posted by Tim Emrick at 8:11 AM