Time of the Tarrasque: Javanian Temples

Happy New Year, everyone! Just a very quick post this week due to the holidays.

The following is an excerpt [with notes] from my page about the Javanian Pantheon, at the Time of the Tarrasque wiki. These four gods, who have dominion over light, darkness, and the heavens, are the ancestral gods worshiped by the halfling race in this world. They were adopted by the humans who first encountered the halflings and settled in the same lands.

Javanian temples prominently feature large domes and soaring towers. In all but the smallest temples, two towers represent the sun and moon gods [Talitar and Yaziel, respectively], and serve as observatories as well as monuments to the gods' glory. The most common floorplan for a Javanian worship site is a large central dome with four smaller domes intersecting it at the cardinal points. The east dome is topped by the Tower of the Sun, the west dome by the Tower of the Moon. The other two smaller domes have no towers. The north dome, which gets the least sun, is dedicated to the shadow god Jorilin. In ancient times, the south dome represented Asmolon [the Void], but this associated has been abandoned since the fall of Javanis [which was brought about by the Void's cult]. However, this dome remains the location of the temple's large, spacious main entrance. (In equatorial Javanis, the north and south domes were reversed so that the Shadow Dome received the least sunlight.)

Talitar and Yaziel are gods of knowledge, so most temples maintain a library of religious and secular works. In most settlements, the priests operate a school. Many also include an orphanage, where children in need can have a family of sorts and learn a trade.


While developing these details, I also made microscale models of two sample temples as a visual aid: 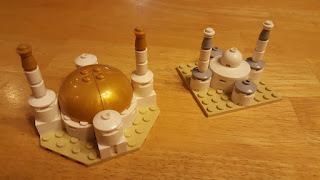 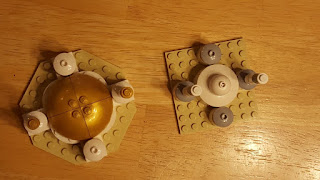 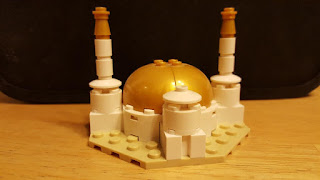 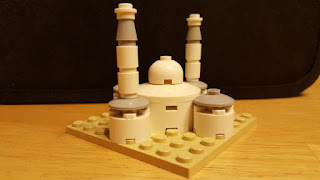