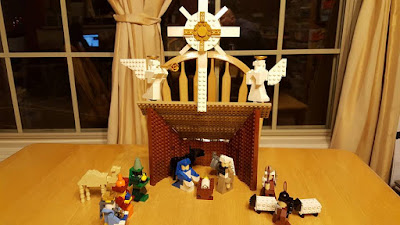 With Christmas just a week away, I was reminded of the LEGO Nativity set that I built for our holiday decorations two years ago. I disassembled those models soon after the holidays rather than storing them, and also so I could reclaim the bricks for other projects. But I took several photos, which I'm sharing here, with a few comments about some the building techniques I used.

Part of the inspiration for this set was a papercraft Nativity that my parents displayed in our home every year. These had originally come as a book of cut-and-assemble models, one for each day of Advent, when I was in very early elementary school. Besides the pieces and instructions, the book also retold the Biblical story of Christmas (including many apocryphal details, like the Magi's origins and the Christmas rose), split up into passages matching that day's paper element. Part of the heavier cardstock cover formed the stable and backdrop for it all. The models were cute little pieces of art, and I usually called dibs on unpacking and arranging them each year.

For my LEGO scene, I first had to choose a scale. Using minifigures seemed a bit like cheating--plus my selection of "Middle Eastern-looking" garb consisted mainly of turbans, hoods, capes, and Star Wars robes. Instead, I made stylized brick-built figures about half again to twice that height. 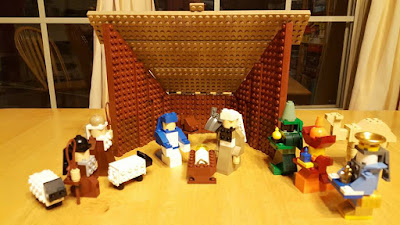 The stable was built of plates, with click-hinges connecting the roof and side walls to the back walls. The side walls were positioned at an angle, and their top edges used angled plates to build their trapezoid shape.

The people's bodies were essentially stacks of regular and sloped bricks and plates. 2x2 cylindrical bricks are used for heads, and various SNOT (Studs Not On Top) parts were used to make beards and headdresses. 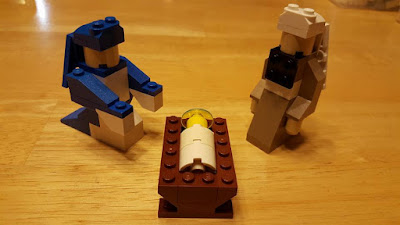 The manger was a small ship's hull piece, with bricks filling in the ends, and 1xN plates around the top; a couple more plates gave it a more stable base. Being a much smaller person, the baby Jesus used a blank minifigure head, with a radar dish added for a halo. (Mary and Joseph lacked halos because--unlike the angels below--I couldn't find a solution that I was satisfied with.) 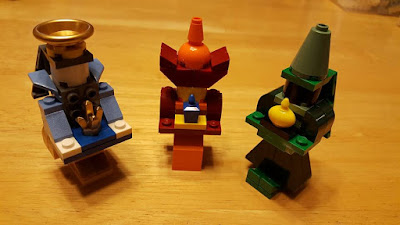 The three Magi were, as befits kings, the most colorful models in this set. I used contrasting colors and styles for their robes and headgear, and heads of different colors (white, yellow, and black) to match one traditional depiction of them as belonging to different races. Two of their gifts were pieces from the Orient Bazaar LEGO Game; the gold crystal is a piece common to mining-themed sets. 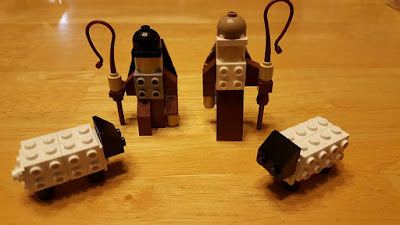 The shepherds were built in neutral tones to show their humble origins. Their crooks were built from whips and wands. The sheep were 2x4 bricks covered with SNOT pieces that both suggested their wool and allowed a slope brick head and a 1x1 round plate tail to be attached. (The sheep were inspired in large part by the Wild Wool LEGO Game, though my models weren't designed to be sheared.) 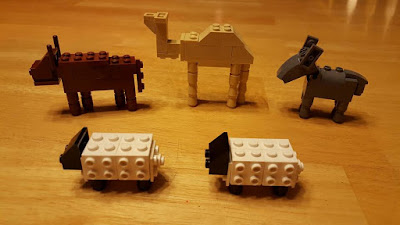 The other animals--cow, camel, and donkey--were built using various techniques that I touched on in "Building the Bestiary #6: Four-Legged Friends," though at a slightly larger scale. This camel was very similar to the model from that column (which preceded this project by a few months), except that the head and neck were built from a number of SNOT bricks. 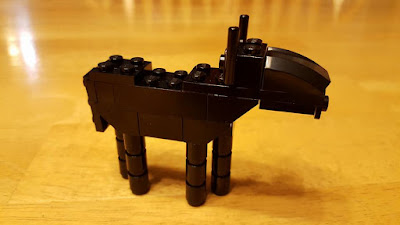 After taking the previous picture, I redesigned my cow model to make it a little smaller and less blocky. 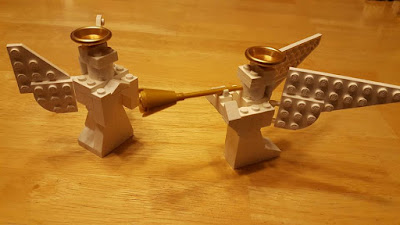 The angels were monochrome except for their halos and the trumpet. Wings were attached using one of the techniques used in "Building the Bestiary #15: For the Birds" (which was posted the following summer). 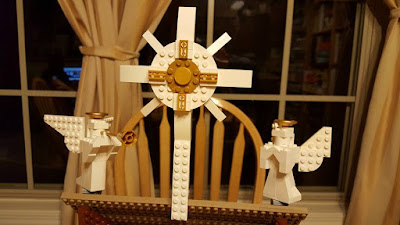 The star was built out of round plates and sloped bricks. The 8 rays were sandwiched between two disks of plates, which allows the smaller rays to be turned to the diagonals. The star's tail was attached to the roof of the stable using some click-hinges. This photo also shows the placement of the angels, which were attached with hinges and 2x2 turntable plates.

The photo below shows the finished set, arranged atop a small shelf unit in our living room, where it remained for most of December. The shelf had a very smooth veneer, so I placed a sheet of felt on top before placing the LEGO models. This kept them from sliding around (or off) at the slightest bump or vibration. 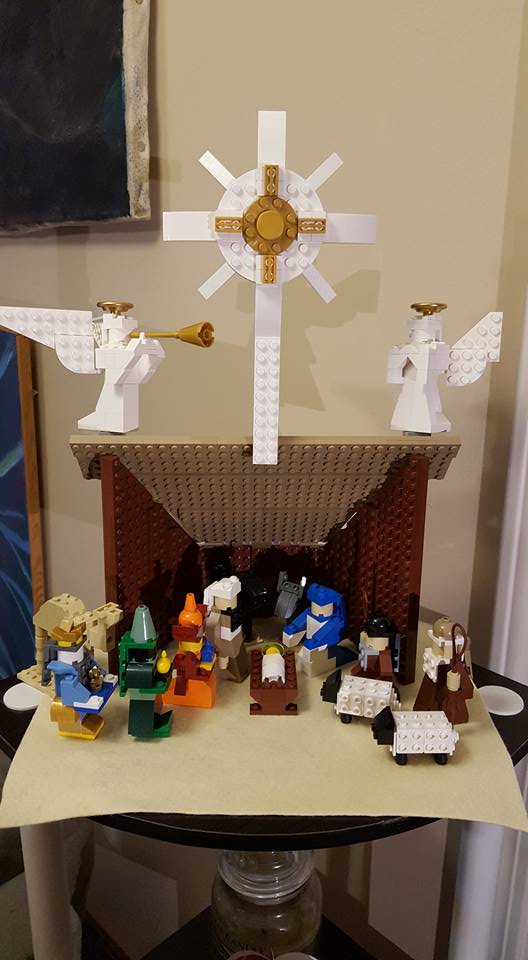 Whether you celebrate Christmas, Hannukah, the solstice, another winter holiday, or none of them, I hope that the close of this year and beginning of the new year prove to be happy for you all!
Posted by Tim Emrick at 3:18 PM