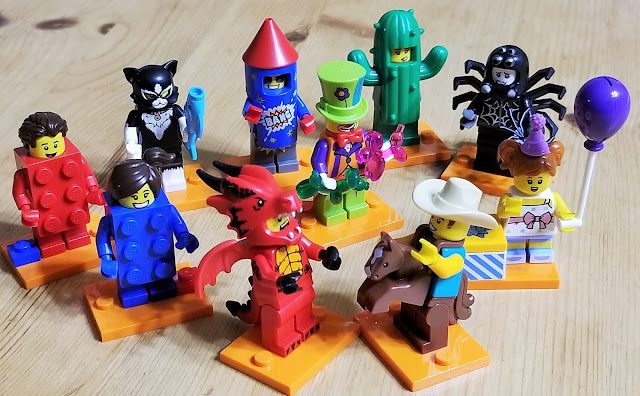 Series 18 of the collectible Minifigures line has a party theme, because it celebrates 40 years of the LEGO minifigure. This set of 17 includes 16 new characters, all in party clothes or costumes, plus a copy of a 40-year-old minifigure. This set introduces a new baseplate color, a bright orange.

1978 Police Officer: This character is a replica of one of the very first LEGO minifigures, with the classic minifig smile, and a simple uniform design. Because this is a birthday party, he is bringing a gift of a vintage LEGO set made of a 1x2 plate and printed tile.

Birthday Party Boy and Birthday Party Girl: These two children have fancy party outfits, including short pants on their short legs. (These legs are molded in multiple colors, but with visible mold lines rather than the smooth join found in earlier series with this technique.) Each guest comes with a balloon (a single piece formed by fusing two halves around the string) and a gift box. Each box holds a couple of printed 1x1 tiles: a couple of cookies or donuts from the girl, and vintage Minifigures (yellow Series 1 bags!) from the boy. Finally, the girl has a party hat that attaches to her hairpiece with a small pin.

Cactus Girl: This guest's torso (under the main barrel of her costume) is printed with a striped sweater, and has cactus arms rather than minifigure hands. Her head is two sided, one side smiling and the other looking uncomfortable. I look forward to swapping in a green head to use this minifigure as a saguaroi (an intelligent cactus race in Pathfinder).

Cake Guy: This guest's powder-blue tux is smeared with pink frosting from the cake that he stands waist-deep in. It's unclear whether he's meant to be springing out of the cake, because the large two-tier cake brick is clearly too small to hide a whole minifigure. The cake can be used on its own by filling in the 1x2 leg slot (which 4 plates deep).

Cat Costume Girl: This black and white cat suit has two-color molding on the arms and legs, with printing to make the seam look more furry. (However, the seams suffer from the same problem as the party guests' pants.) The head under the mask sports cat makeup, which is a nice touch, and means the piece could be used for a more human-looking catgirl by swapping the mask for a wig. She comes with a classic fish as a prop, but it's in turquoise for the first time.

Cowboy Costume Guy: This variation on the "cowboy riding a horse" costume is really quite clever, with the front half of the horse being a much smaller copy of a LEGO horse (specifically, the newer, hinged version that can rear). This costume would be very useful for representing a Small humanoid riding a Medium pony--and would be much easier to fit into a 1" square than most alternatives.

Dragon Suit Guy: This is easily my favorite entry in this Series! The costume uses the same small wings as the Cute Little Devil and Gargoyle from earlier series, but the reptilian head and tail are new. The minifigure's (human) head has two faces: one smiling, and one angry. By swapping in a blank black head (or Orca's gaping mouth, from The LEGO Batman Movie Minifigures Series), the costume makes an lovely Medium dragon, or (minus the wings) a fierce dragonborn. The head, wings, and tail remain useful for draconian characters who wear armor (or any clothing at all).

Elephant Costume Girl: This girl wears a gray elephant costume with a pink tutu. She comes with a cute, small mouse, which would make a great figure for a mouse or rat familiar. Her face is also crying, as if she's as scared of mice as elephants are supposed to be.

Firework Guy: This costume is a big, chunky cylindrical piece that fits over the head. The torso underneath is plain, but with red hands to match the cone. The pants are printed with the blast of fire for the rocket, which suggests a whole host of snarky jokes (not all suitable for children).

Flowerpot Girl: This costume consists of a large flowerpot that fits around the waist, a torso printed with a flower stem, and a large flower around the face. For a more ambulatory plant monster, remove the pot and replace the legs with green pants. 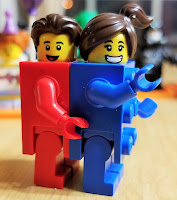 LEGO Brick Suit Girl and LEGO Brick Suit Guy: These two matching costumes consist of special new torso pieces that look like 2x3 bricks (but are an additional plate thicker to allow enough room for the head and legs to attach.). Each comes with a nice hairpiece that will be very useful for other characters, as well as a 1x1 plate for a gift. Because the back is molded to match the bottom of a plate, these costumes easily snap together front-to-back. The result is a bit kinky-looking, but could also be used as the basis for a multi-legged, many-armed monster.

Party Clown: This clown wears a gaudy orange, purple, and green suit with absurdly long coattails. (This fabric piece is the same as the Joker's from The LEGO Batman Movie, except for color.) He also has a bow tie and large top hat, but the best parts of this character are his props: two balloon-animals, in transparent pink and green. These dogs' legs are too rounded to stand up easily by themselves, but the body is a standard bar diameter, so improvising a base is fairly easy. (See the photo below for two examples.)

Race Car Guy: This costume is a typical race car driver's jumpsuit with a helmet, but with a car that fits over the hip posts. The car's wheels are skateboard wheels, and the engine in back is covered with a printed U-shaped 1x1 tile. The car is too small a scale for microfigures, and even trophy figures would stick up quite a bit. However, a 1x2 plate (or jumper plate) with a 1x1 round plate or two would be just about right to suggest passengers.

Spider Suit Boy: This costume consists of a web-patterned jacket, a hood-like spider head, and a large rubber spider body that fits over the neck. This last piece would be perfect for use as a Medium giant spider by itself (see photo at right). The boy also comes with a standard spider prop, and a double-sided white head that would be useful for a vampire, fetchling, or other very pale race.

Unicorn Guy: The final character is a powder-blue male version of the Unicorn Girl from Series 15. This one comes with a shield with a unicorn emblazoned upon it and a golden longsword. The face is smiling and winking, as if he knows he looks ridiculous, but is owning it. As with the Unicorn Girl, this costume can be turning into a young unicorn by simply swapping the head for a blank one of a color matching the suit.