The Book of the Righteous and the World of Freeport 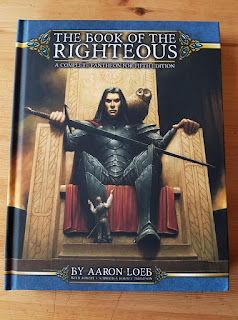 In 2016, Green Ronin conducted a Kickstarter to update The Book of the Righteous to D&D Fifth Edition. The print book debuted at GenCon 2017, and backers like me received their copies about the same time. I had never acquired or read the original Book (written for v.3.0), largely because it was a thick, expensive hardcover (320 pages!) and I tend to prefer creating my own pantheons for my D&D campaigns. However, I've come around to thinking that I should try using those gods in my next Freeport campaign. The City of Adventure uses deliberately generic deity names (God of the Sea, God of Pirates, etc.) to make it easy for DMs to fit Freeport into their own campaigns. Using the gods from The Book of the Righteous seems the next logical step in creating a more uniquely "Ronin" campaign.

The 5E version of the book also promised to have a wealth of new crunchy bits for religious characters. One of the few real disappointments I've had with the 5E Player's Handbook is how short the list of domains is compared to 3E. The new Book of the Righteous fills in most of the "missing" domains, and adds some new ones (like Beauty and Corruption). Non-clergy in the gods' service also get new options, with at least one new subclass or other option for each class in the Player's Handbook.  That's very welcome material for a DM like me who enjoys homebrewing, because it facilitates giving each god and their church a distinct flavor. That's ultimately what sold me on backing the Kickstarter.

The Pathfinder edition of Freeport: The City of Adventure (FCoA) gives the most extensive list of gods (pages 401-402) of any sourcebook yet produced for the setting. For the remainder of this column, I will try to match that data to suitable gods from The Book of the Righteous. (The new edition omits the original book's "Listing of the Gods," which provides a quick summary of gods by portfolio. I have used that list to double-check my own conclusions below.)

The four most prominent gods in Freeport are the Gods of the Sea, Knowledge, Warriors, and Pirates.

Other gods worshiped in the city include:

The "Unique Gods" listed on page 402 of FCoA do not have counterparts in The Book of the Righteous. I would suggest the following domains for these gods:


Some of these unique gods are given more detail in Cults of Freeport. I intend to write a future column about using that sourcebook with The Book of the Righteous.

In addition, cults of Asmodeus (LE god of lies, power, and fire) and various archdevils have operated in Freeport in the past (see especially Hell in Freeport). The King of Hell's domains are Fire and Tyranny.

Finally, the Continent is also home to some other religions not listed on pages 401-402:


Note that the Great Church has not yet been mentioned in any of these suggestions. In the World of Freeport, that religion either lacks the ubiquitous nature ascribed to it in The Book of the Righteous, or it is most active in regions not dominated by a specific god's church. The latter would be the case in my proposed "all-Ronin" take on Freeport. For example. the Great Church is unlikely to have as much influence in Hexworth, where the Inquisition rules supreme, as it would in the more cosmopolitan Ivory Ports. It lacks a proper temple in Freeport, though the Continental Great Church almost certainly sponsors missionaries to seek converts in the city.